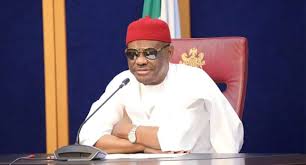 ENUGU, Nigeria (VOICE OF NAIJA)- Ahead of the 2023 general elections, Governor Nyesom Wike of Rivers State has promised a more intense political engagement from his camp, saying that his strategies will choke his opponents.

Governor Wike stated this in response to some media publications, during the commissioning of the Rivers House of Assembly residential Quarters on Friday.

According to the publications, the Governor has removed the insignia of the PDP, including its flag from the Rivers State government House and has also sued the party, its presidential candidate, and the Governor of Sokoto State over the outcome of the Presidential primary.

In response, Governor Wike described the publications as the handiwork of his detractors who he claimed are supporters of the presidential candidate of his party, Atiku Abubakar.

He dismissed both reports as false and warned the said Atiku supporters to allow him concentrate on governance.

However, he promised to begin real-time politics in a short while after completing the series of project inauguration and flag off, vowing to “choke them”.

Wike also warned Atiku to be wary of those who pledge support for him, accusing such persons of being the same people that thwarted Atiku’s chance of winning the 2019 Presidential election.

On why he invited the Speaker of the House of Representatives, Femi Gbajabiamila, to commission the project in Port Harcourt, Governor Wike said the federal lawmaker helped his administration to access the Paris Club Refund, part of which was used in executing the House of Assembly Quarters project.

He said he holds the Speaker in high esteem, desire being one of the PDP leaders who plotted against him being elected the Speaker of the House in 2019.

According to him, he does not regret the action, because he was playing the role deserving of an opposition figure, even though some of those who plotted with him later betrayed him and turned around to support Mr. Gbajabiamila to emerge the presiding officer.

In his speech, the Speaker encouraged Governor Wike to choke his detractors.

Gbajabiamila said, although he and Governor Wike belong to different political parties, they both share a determination to ensure a united Nigeria.

The Speaker asserted his conviction on the phrase that in politics there is no permanent friendship or enmity.

He, however, expressed the hopes that his friendship with Governor Wike will be a permanent one.