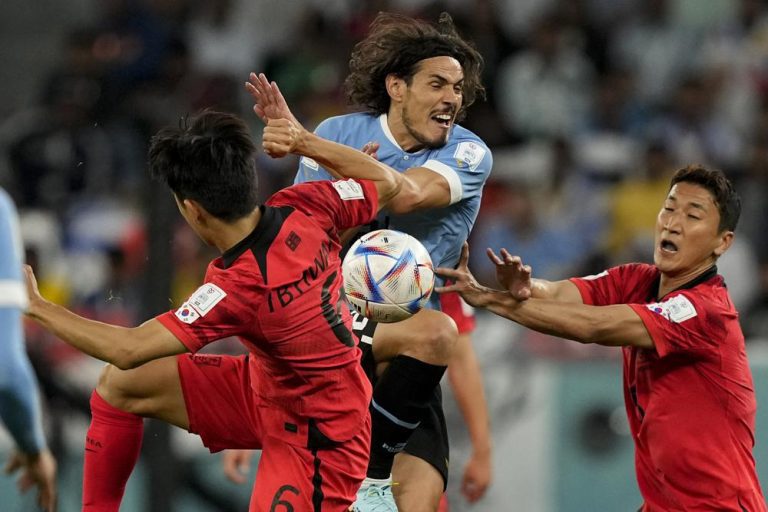 South Korea held Uruguay to a 0-0 draw on Thursday, a result that probably favors the Asian team after missing a number of chances.

South Korea, with forward Son Heung-Min wearing a mask to protect a broken left eye socket, always looked the more likely to score against the more experienced Uruguayans. The South Koreans were quicker, pressing from the opening whistle.

Many South Korean fans wore Batman-like masks in solidarity with Son, who was injured on 2 November, in a Champions League match playing for English club Tottenham. He had a few early chances but seemed to tire in the second half.

“He (Son) had a serious injury,” Bento said. “He was inactive for a considerable amount of time. He could only get back with the team in the recent days. And of course it’s natural after an injury that it will take time some time to adapt. But I think overall we had a good performance.”

In a match with few clear scoring chances and South Korea often in control, Uruguay had the best opportunities to score: Diego Godin hit the post with a header in the 43rd minute and Federico Valverde hit it in the 89th.

Alonso started an attacking lineup with Luis Suarez, Darwin Nunez and Facundo Pellistri up front, and with Valverde and Matias Vecino in midfield. But they seldom had the ball at the start.

South Korea pressed forward early and Son excited the crowd every time he touched the ball, but he managed only one threatening attack in the first half. South Korea always looked quicker than Uruguay, but not necessarily the more dangerous.

The team’s best chance came in the 34th minute when Hwang Ui-jo sailed a close-range attempt over the crossbar.

As the second half wore on, Uruguay began to take more possession but always seemed cautious, taking less initiative despite having the more experienced players.

Son went down in a heap early in the second half with Martin Caceres getting the first yellow card of the match.

Alonso sent in Edinson Cavani for Suarez in 64th minute as the pace of the match slowed until Valverde hit the post in the final minutes.

“In the first 20 minutes, we struggled against Korea,” Alonso said. “We couldn’t take the ball from them. We couldn’t get any pressure and lost precision.

“Obviously, the second half we dominated much more. We were better than them, I think, but we lacked a bit of attacking. I mean attacking more. We tried to be more competitive, too.”

The draw at Education City Stadium was yet another early World Cup match with a surprising result.

Argentina and Germany both lost their opening games in major upsets. This one hinted at being another.

“I’m more than happy with the result,” Alonso said. “I’m sure that this group stage will be determined by the last match. We all know the second game is key, and so is the third one. But this will not affect whether we qualify of not.”

Uruguay will next face Portugal in Group H while South Korea plays Ghana, with both games on Monday.

The top two teams in the group will advance to the round of 16.