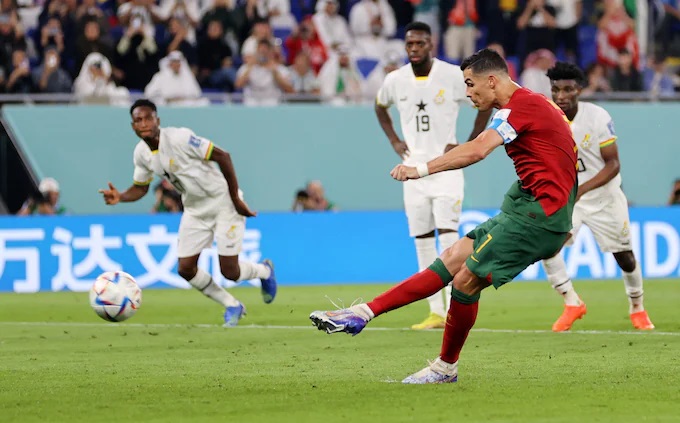 A Cristiano Ronaldo-inspired Portugal had to be at their defensive best to hold off a spirited Ghana in their first group match at the ongoing Fifa World Cup in Qatar.

The former Real Madrid superstar scored a second half penalty to become the first player to score in five consecutive World Cup tournaments.

But about eight minutes later, Skipper Andrew Ayew leveled for the African Giants but they could not hold on for so long as the former European Champions took the lead again in five minutes.

Joao Felix scored when the Ghanaians were still celebrating still being in the contest while Leao doubled the lead shortly afterwards.

Bukari had a free header to ensure Ghana kept their hopes alive. The atmosphere in the stadium became electrifying as the West Africans increased the tempo.

They were almost rewarded with an unprecedented equalizer when Inaki Williams stole the ball from Diogo Costa, but it was not to be as the Portuguese stood out.

It ended 3-2 in favour of Ronaldo’s Portugal, but the Africans had put up a fight and gave it all on the pitch.