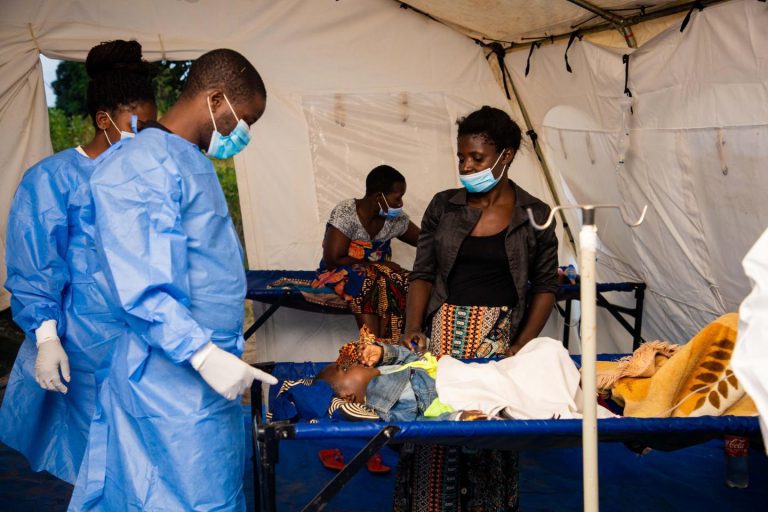 Malawi is in the grip of a cholera outbreak which has spread across the country, killing 292 people and infecting 9447 since March when the first case was reported, according to health minister Khumbize Chiponda.

The outbreak has spread to nearly all of the country’s 28 districts, killing more than 250 people and infecting more than 8,000.

“The cholera situation as of currently, we are receiving a lot of cases every day, the numbers have spiked at the moment, we are getting about four or three cases per day,” said Dora Mwafulirwa, who is in charge of the Limbe Clinic in Blantyre.

The situation is more critical in areas where residents use water from untreated sources like rivers, where bacteria can spread the diarrheal illness.

“We used to have tap water in my area, but all the taps were vandalized, and also it’s very hard to access water from boreholes because most of them are not working,” said Elida Phiri, a resident of Blantyre’s Chigumula Township.

Heath workers fear the increase in cases will overwhelm clinics.

“Our camp has got only four beds and one room. And the four beds in the other room,” Mwafulirwa said. “And in most cases, it is getting full, and this is in dry season when the cholera season is not started.

“So, we should expect more cases and we may not have enough space for everyone when the rainy season starts.”

Malawi started vaccinating against cholera in May with support from the World Health Organization. But community health workers say the uptake has been slow because many people shun the vaccine.

“They often ask why we are bringing so many vaccines,” said Thamu Chinula, a senior health surveillance assistant at Ndirande Clinic, in Blantyre.

“They fear the vaccine might cause infertility. They say the vaccine is meant for children, without knowing that anyone can receive the vaccine, depending on the gravity of the outbreak at hand.”

Malawi this month received nearly three million doses of cholera vaccine with support from the WHO, the Global Vaccine Alliance and the U.N. Children’s Fund (UNICEF).

In the meantime, health workers are educating communities on the need to get the vaccine and how to sanitize water supplies to make them safe for drinking.

On 3 March, 2022, the Ministry of Health Malawi declared a cholera outbreak in the country, following confirmation of a case in a 57-year-old male, from Machinga district, in Southern Malawi.

On 28 February, the case developed watery diarrhoea and visited Machinga hospital where cholera was confirmed on 2 March.

Samples from the patient tested positive by culture and Vibrio cholerae O1, serotype Inaba was isolated. The case had a history of travel to two cities – Blantyre and Machinga — prior to being admitted to the district hospital.

Although an epidemiological investigation was carried out, the source of the infection was not identified.

On 7 March, 2022, a second case was identified in a 11-year-old boy at a local health centre from Nsanje district, Malawi.

The case was displaced to Mozambique following floods caused by the tropical storm Ana and cyclone Gombe and returned to Malawi while symptomatic.

In April 2022, a total of 78 cholera cases with four deaths (case fatality ratio: 5.1%) have been reported from Nsanje (76 cases; four deaths) and Machinga (2 cases) districts.

Cholera is an acute enteric infection caused by ingesting the bacteria Vibrio cholerae present in contaminated water or food. It is mainly linked to insufficient access to safe drinking water and inadequate sanitation.

It is an extremely virulent disease that can cause severe acute watery diarrhoea resulting in high morbidity and mortality, and can spread rapidly, depending on the frequency of exposure, the exposed population and the setting.

Cholera affects both children and adults and can be fatal if untreated.

The incubation period is between 12 hours and 5 days after ingestion of contaminated food or water.

Most people infected with V. cholerae do not develop any symptoms, although the bacteria are present in their faeces for 1-10 days after infection and are shed back into the environment, potentially infecting other people.

Among people who develop symptoms, the majority have mild or moderate symptoms, while a minority develop acute watery diarrhoea with severe dehydration.

Cholera is an easily treatable disease. Most people can be treated successfully through prompt administration of oral rehydration solution (ORS).