Why Embolo Didn’t Celebrate His Goal For Switzerland Against Cameroon 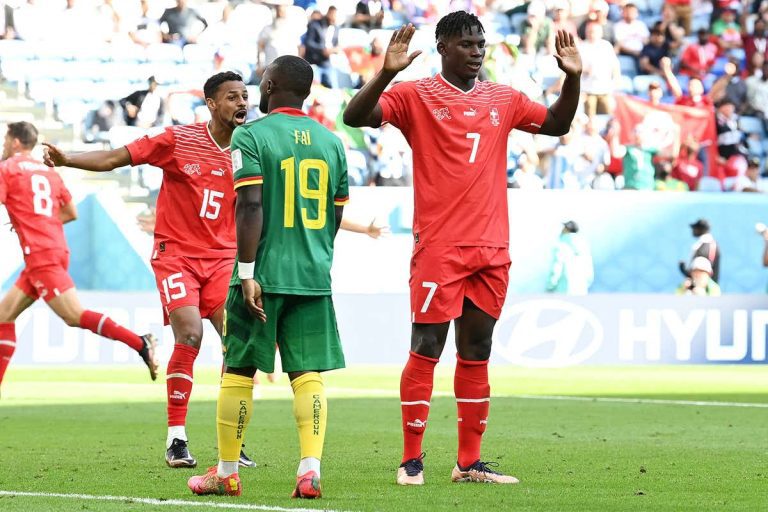 Switzerland’s Breel Embolo scored the only goal of a cagey game to earn Switzerland a winning start to their Group G campaign but his celebration was muted.

The Monaco forward broke the deadlock three minutes into the second half of Switzerland’s opening fixture on Thursday, but he chose against celebrating it and instead raised both hands while appearing to apologize.

Embolo, 25, was born in the Cameroonian capital of Yaoundé, before moving to France with his mother at the age of five, where she met her future Swiss husband.

Shortly after the family therefore relocated to Basel, where Embolo plied his trade as a youth player and, as a result, received Swiss citizenship in 2014.

After featuring for their Under-16 side, he committed his international allegiance to Switzerland in December of that year and has since earned 59 caps.

Fans were quick to praise Embolo over his mark of ‘respect’ for Cameroon, taking to Twitter to express their admiration for his muted celebration.

One wrote: “Embolo was born in Cameroon? Much respect for that celebration.”

Another posted: “Respect for #Embolo #FIFAWorldCup for not fully celebrating the goal. That shows some love.”

Another netizen commented: “Embolo scored for Switzerland and didn’t celebrate because he was born in Cameroon. Class.”

Despite plunging his side to defeat, Cameroon head coach Rigobert Song reserved a word of praise for match-winner Embolo, telling reporters at the Al Janoub Stadium: “he is my little brother.”

“We often speak to each other on the phone and I wanted to congratulate him,” he continued. “Just because we are on different teams, it does not mean we are not still brothers.”

The 25-year old then moved to German club Schalke 04 in 2016 and went on to play for Borussia Monchengladbach in 2019 on a four-year contract.

In the 132 appearances he made in Bundesliga, he scored 28 goals and turned provider for 29 goals.

“I’m probably 60 or 70 per cent Swiss now, even more so than I’m African,” said Embolo in an interview to Bundesliga last year.

Cameroon’s streak of losses at World Cup finals has extended to eight games, dating back to 2002, but they have the chance to improve that record when facing Serbia on 28 November; kick-off 10am. Switzerland next face hotly-tipped Brazil on the same day; kick-off 4pm.