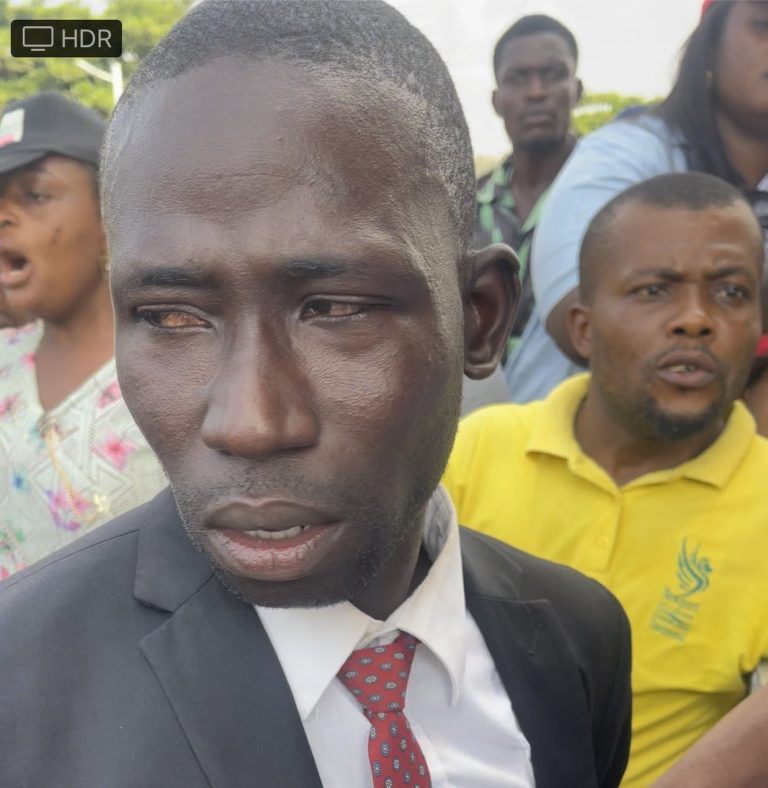 IBADAN, Nigeria (VOICE OF NAIJA) – A man in suit was caught on Wednesday, with a dagger at the campaign rally of the Labour Party presidential candidate in Oyo State.

The mild drama ensued on Wednesday after the yet-to-be-identified man was arrested with a dagger as supporters waited for the arrival of the former Anambra State governor and party flag bearer, Peter Obi.

In a video that was shared by a Twitter user, Bishop P. O. Enang on Thursday, the man stood along the path the Labour Party’s presidential candidate for the 2023 election was to go through.

He insinuated the the man would have stabbed Mr. Obi but was caught in the act.

The young man was reportedly standing in the walkway as Peter Obi approached.

Enang also warned rivals against taking careless actions with the life of the former Governor of Anambra State.

He wrote on Twitter: “Face of the guy who was caught with the dagger 🗡 in Ibadan today. he is not, DSS, not Police, not a bouncer not a security personnel. Uploading video soon. He just stool where PO will pass, the walk way. If una try this nonsense with us, world war 2 nah play.”

The campaign council of the Labour Party and the Nigeria Police are yet to confirm, or comment on the event.

The supporters of Peter Obi have since reacted to the viral video.

A tweep, @honeychukwu said: “Why were they protecting him and taking it likely? The criminal was trying to impersonate DSS to avoid suspicion.”

Ibrahim Abubakar wondered why Hausa was the first language spoken to the man. He tweeted: “Na wa oooo. But why was Hausa the first language he started speaking to him? So what gave him the impression that the person must be Hausa? We really need to work on this profiling mentality if unity is truly what we seek. Though, thank God the suspect didn’t hatch his plans.”

Another tweep, @davsess wrote: “Seems like he is an OPC/Afenifere local guard wey miss road,that’s why that man is shielding him. He is not supposed to be at that area at all aside from the DSS and police men.”

@DikeDanielEmeka tweeted: “Who is that man on white shielding him? Peter Obi should be wery of those in Labour Party ooo.”

“The complacency from the police officials in this video irks me fr. What in God’s name is this friendly approach?” @yunghuyt queried.

‘Last born’ also wrote: “Today would have been the beginning of the end of Nigeria, but God really loves this country, we most take back our country its not negotiable, may God gird and protect Our incoming president Mr Peter Obi for us amen 🙏🙏”

Earlier, the Labour Party (LP) campaign organization said the aircraft it was meant to take for a rally in Oyo State was grounded by the “powers that be”.

Peter Obi, presidential candidate of the LP, and his entourage were heading to Ibadan, the Oyo State capital, from the Nnamdi Azikiwe International Airport in Abuja when the incident happened.

The plane was grounded for “regulatory reasons,” according to Diran Onifade, director of media for the LP campaign, in a statement on Wednesday.

Onifade also urged LP supporters to disregard “mischievous rumors” that the jet had been seized.