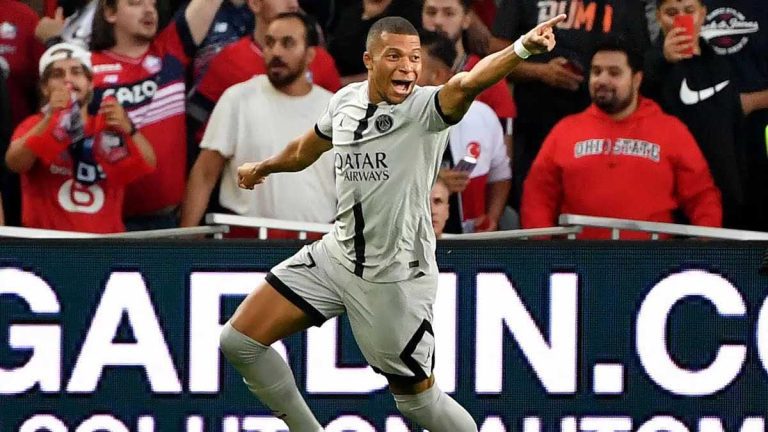 Kylian Mbappe scored the fastest goal in Ligue 1 history as PSG defeated Lille to extend their 100% start to the season.

The striker took just eight seconds to slot his side in front, running on to Lionel Messi’s delicious ball over the top as the visitors waltzed to a 7-1 victory, scoring four before half-time.

Lille dropped to 12th place on the La Liga table after there emphatic home defeat to Paris Saint Germain on Sunday night.

This match, away to the 2020/21 champions, was supposed to be PSG’s first big test of the season.

Paris Saint-Germain continued their relentless march in Ligue 1, making it three wins from three games with a 7-1 thrashing of Lille away from home.

Paulo Fonseca’s side were left shell-shocked by the opener, but they regrouped and came close to an equaliser on a couple of occasions when Gianluigi Donnarumma made comfortable enough saves from Jonathan Bamba.

They were 2-0 down on 27-minutes though as Messi picked out Nuno Mendes on the left before trotting onto the return pass and slotting into the far bottom corner.

Lille had further chances to get back in it through Jonathan David, who forced two stops out of the goalkeeper, but PSG put the game out of reach before half-time when Achraf Hakimi added a third, tucking under Leo Jardim when running onto Neymar’s pass.

The Brazilian then turned from creator to scorer as he lashed a first-time effort in at the near post to make it 4-0 before the break.

The visitors got their fifth within minutes of the restart as Neymar got his second, although he had Mbappe to thank for a selfless stepover in the box that allowed the ball to run through to the striker, and he slotted into the far corner past a despairing Jardim.

PSG then momentarily switched off, allowing Lille to get a consolation goal through Bamba, who bundled over the line at the second attempt after Donnarumma had saved his initial effort.

But the five-goal lead was soon restored as Neymar returned Mbappe’s assist, deftly flicking into the path of the striker who clattered into the back of the net.

And the advantage would extend to six when Mbappe grabbed a hat-trick late on to complete the rout.

That makes it 17 goals in three games for Cristophe Galtier’s side with just three goals conceded.