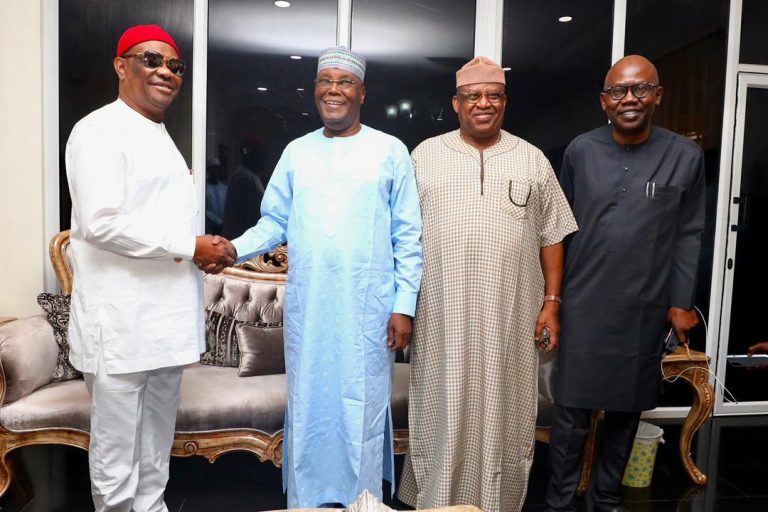 IBADAN, Nigeria (VOICE OF NAIJA)- A former governor of Jigawa State, Sule Lamido, has said the reconciliatory meeting between Governor Nyesom Wike of Rivers State and the presidential candidate of the Peoples Democratic Party, Atiku Abubakar, is a sign of positive things to come

According to him, the meeting held in the residence of a former Minister of Information and Orientation, Prof. Jerry Gana, was a sign of positive things to come.

Lamido in an interview with The PUNCH on Thursday evening, recalled how Jerry Gana left the PDP because of Wike but later returned to the party after serious but begging by himself, former Senate President, David Mark and PDP national chairman, Dr. Iyorchia Ayu.

He said, “Honestly I have no idea about it. But if it (the meeting) really held, I will be the most happy person because the person in whose house it was held, Jerry Gana, is one of the three surviving founding fathers of the PDP. All others are dead.

“So, it now means he is becoming consciously disturbed because the party to which he gave his sacrifices, which his colleagues died for, he is now bringing sanity into the party.

“Those are my feelings and that is fine because there was one time when Jerry Gana left the PDP because of Wike. It was me, David Mark and Iyorchia Ayu who went and begged him. You see, there is no one in Nigeria that is greater than this party and you cannot leave because of somebody, you can’t do that.

“So, at the end of the day he is now doing what a leader should do. Today, he is now concerned about the state of the PDP and he is going out of his own way, to make sure whatever might have been our differences are now harmonized.

“I thank him for remembering the role he played in the PDP and the legacy of the founding fathers, his fellow brothers like Abubakar Rimi, Bola Ige, Alex Ekwueme, and Adamu Ciroma, who died in the course of this struggle.”

Lamido also disagreed with demands for the sacking of Iyorchia Ayu.

He said, “I don’t know. It is all to your own imagination. You people see it as entertaining to you, reporting some news that can bring sensation and controversy. That is what you people are doing in the press, creating a situation so that you can sell your papers.

“Out of nine who died, three are alive now others dead. So even for those who died, even for their memory, we should sustain the legacy of the PDP. When you say Iyorchia Ayu has to be removed. I ask by who for God sake? Where were you in 1998? So this should be beyond entertainment.

“The PDP is a serious party, it is a very serious party for God sake. When you begin to embarrass the party, ‘remove Mr A, remove Mr B’, you are not been fair to the party of history and legacy. Because the more you create controversies, the more you are creating tension and the more you divide the party and that is not good for Nigeria.
So, you have to be serious in what we say, in what we demand, how we behave.”

DG, Lamido retorted, “One thing at a time, please. You people keep preempting us. You keep putting preemptive questions, trying to create sensation. We are trying to harmonise the party.”