Leeds Held To A Goalless Draw By Brentford 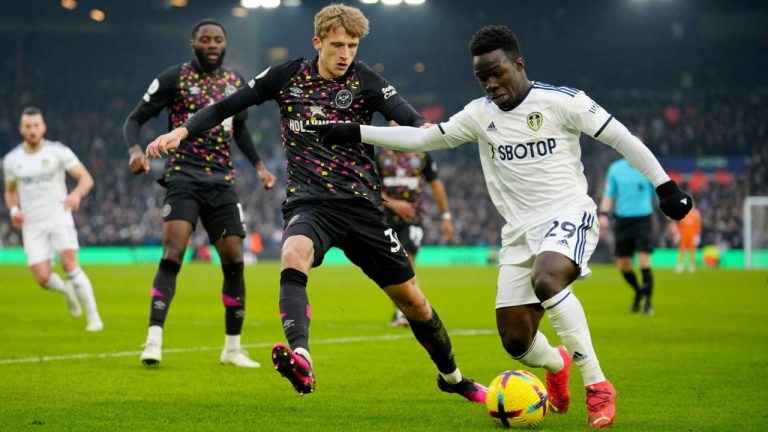 Jesse Marsch’s Leeds team missed a chance to move three points clear of Premier League relegation zone on Sunday as they were held to a goalless draw by resilient Brentford.

In the lively game played at Elland Road, neither side were able to make inroads in their contrasting Premier League bids.

Leeds were hoping to put distance between themselves and the bottom three, while the Bees missed the opportunity to climb into the league’s coveted top six.

The stalemate will suit Brentford better as they have now reached the 30-point mark in record time (the quickest in their top-flight history), while Leeds continue to sit precariously above the relegation zone – one point ahead of Bournemouth in 18th.

Bees goalkeeper David Raya was tested by Rodrigo on a couple of occasions and he also denied Wilfried Gnonto and Brenden Aaronson – with Leeds notching up five efforts on target to the visitors’ zero – but Brentford’s backline remained resolute.

Leeds turn their attention to the FA Cup next weekend, as they travel to either Accrington Stanley or Boreham Wood for their fourth-round clash on 28 January.

Marsch’s side return to Premier League action with a trip to Nottingham Forest.

The Whites then host Manchester United on Super Sunday on the following weekend, with matches against relegation rivals Everton and Southampton ending their schedule for the month.

Brentford’s elimination from the FA Cup means they have next weekend off. The Bees return to Premier League action with a home match against Southampton on February 4, kick-off 3pm.

Thomas Frank’s side then have London derbies against Arsenal and Crystal Palace later in the month, before travelling to Manchester United on 26 February.