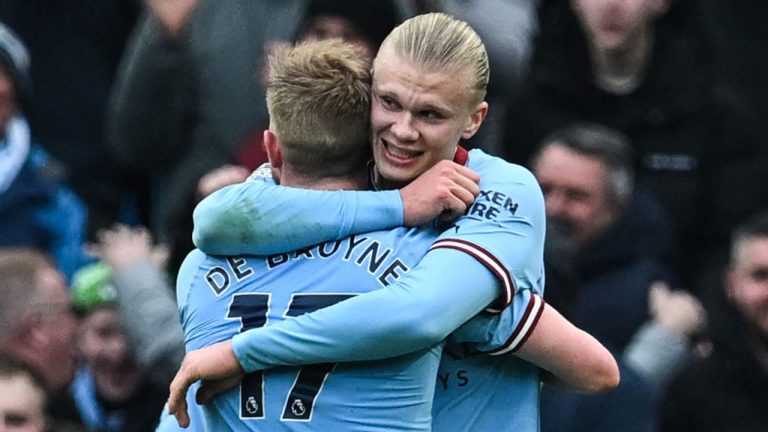 Haaland scored a hat-trick against Wolves as the Citizens maintained the pressure on Premier League leaders Arsenal.

Wolves stifled the home side for much of the first half before Haaland took charge, heading in Kevin De Bruyne’s cross.

Pep Guardiola had been frustrated with his players in midweek, criticizing the lack of fire and there were periods during the first half when that intensity was lacking. But that trusted combination of De Bruyne and Haaland broke the deadlock and City did not look back.

He added a second from the spot early in the second half and completed the hat-trick with a straightforward finish after Jose Sa’s error.

The lively Jack Grealish had a strong penalty appeal denied and saw a shot cleared off the line by Nathan Collins in the minutes after the opening goal as the Premier League champions upped the tempo. Wolves made three substitutions at half-time.

Ruben Neves tripped Ilkay Gundogan inside the penalty box soon after the break and Haaland did the rest from the spot. His third goal might have been even easier, laid on for him unselfishly by Riyad Mahrez after Sa had passed the ball straight to the winger.

The goals take Haaland’s Premier League total for the season to 25 in just 19 appearances.

The mini drought of two games ended with his header against Tottenham on Thursday evening. A new scoring streak has begun.

The result moved City to within two points of Arsenal at the full-time whistle with the Gunners playing one of their two games in hand later in the afternoon. Wolves remain just outside the relegation zone, ahead of Bournemouth on goal difference.