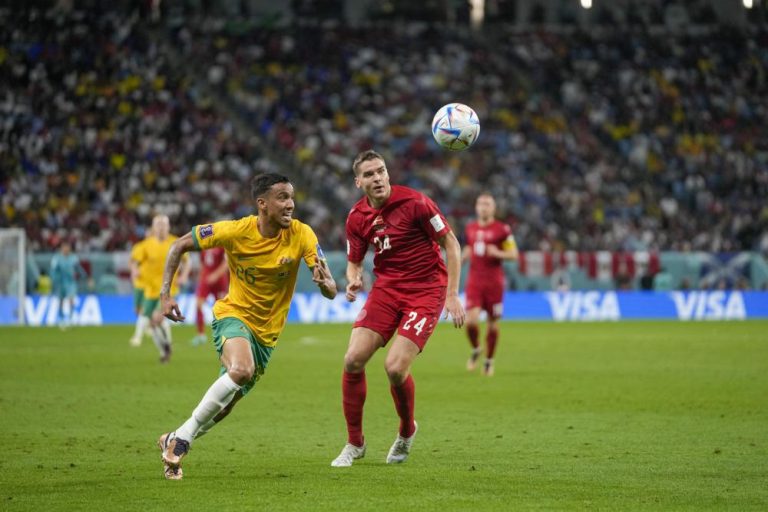 Australia advanced to the round of 16 at the World Cup for the first time since 2006, after beating favored Denmark 1-0 Wednesday on Mathew Leckie’s 60th-minute goal.

It is Australia’s first time in the knockout stage since 2006, the only other time they advanced out of the group stage.

Leckie took a pass near the center circle and moved around a Danish defender before hitting a left-footed shot past goalkeeper Kasper Schmeichel diving to his left.

Australia finished with six points in Group D. Defending champion France won the group on goal difference despite losing to Tunisia 1-0 in the other group match.

The World Cup proved to be a major disappointment for Denmark after reaching the semifinals in the 2020 European Championship. They slogged through a 0-0 draw in their opening match with Tunisia and then recovered in a 2-1 loss against France.

Denmark dominated possession through much of the game but could not generate enough chances.

Denmark’s Mathias Jensen had one of his team’s best chances of the game in the 10th minute, but Australia goalkeeper Matthew Ryan came up with a point-blank save.

Referee Mustapha Ghorbal handed a yellow card early to defender Aziz Behich as Australia defended tenaciously from the start and counterattacked when possible.

Australia started the second half on the front foot as Jackson Irvine fired a good chance over the crossbar. But the Socceroos quickly reverted to defending before breaking through with Leckie’s goal.

On two late corners, Schmeichel sprinted upfield to put himself into the mix in front of the goal as Denmark searched for a goal. Aussie keeper Ryan caught one corner and Schmeichel scurried back. He came all the way back on a second corner with about a minute remaining, but that attempt also amounted to nothing.