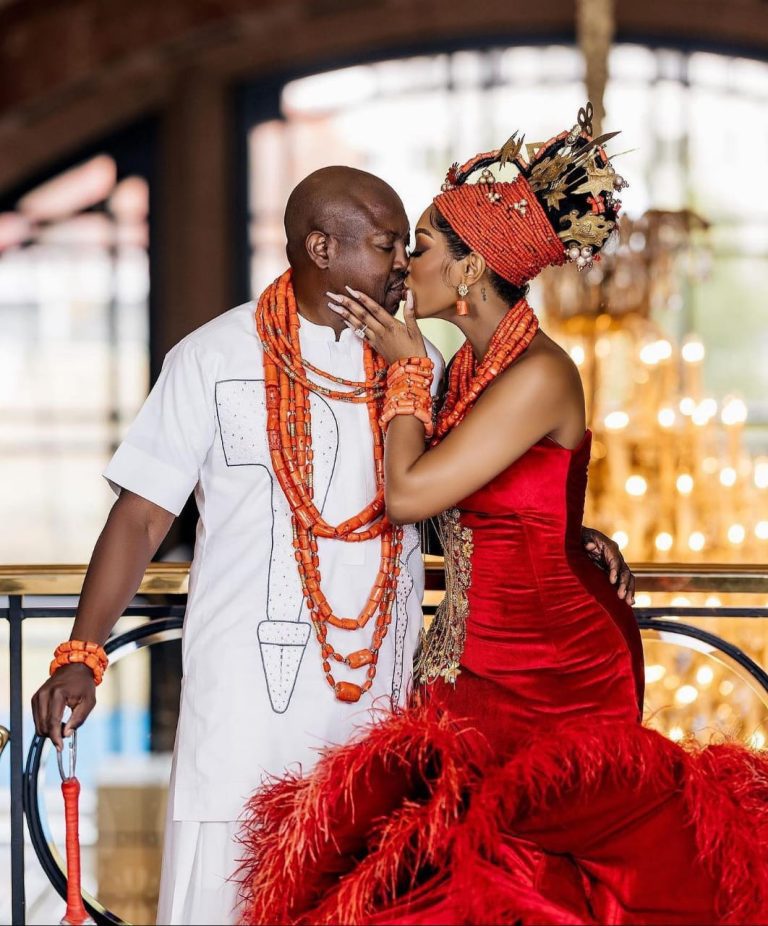 The Real Housewives of Atlanta star, Porsha Williams has shared photos from her traditional wedding to a Nigerian-American businessman, Simon Guobadia.

The couple had multiple weddings last weekend and to honour her new husband’s ancestry, they also had an Edo traditional wedding.

The bride changed into three different traditional clothes for the occassion.

On Friday, the Real Housewife wore a velvet red gown with feather detailing to the traditional Nigerian ceremony. The dress was designed by Lakimmy, according to People. The ensemble was customary for an Edo bride, as Guobadia is from Benin City in the Edo State of Nigeria.

She also wore a headpiece called an okuku that featured Benin coral beads.

According to People, Williams later changed into a royal blue gown and a gold gown, both designed by Tabik.

Williams also told People that guests in attendance at Friday’s ceremony were asked to wear purple and teal traditional Nigerian wedding wear. In line with Nigerian tradition, Williams and Guobadia provided the cultural fabric to make their family members’ outfits, according to the outlet.

“It was a huge undertaking,” Williams told People. “I personally chose the fabrics that they’re going to be wearing, including their head wrap, their gele. I chose all of the colors, everything. I should be a stylist after this!”

The RHOA alumnus tells People: “I am ridiculously excited. I am just so ready. I’m not even nervous. I mean, I know I’m marrying the love of my life, and it’s just going to solidify our relationship and our family bond.”

Fans first met Porsha during season 5 when she was married to her ex-husband, Kordell Stewart. At the time, Porsha was way more reserved and concerned with being a “traditional Housewife.”

After the couple divorced in season 6, viewers really saw a different side to Porsha. A more fun, relaxed, and engaging Porsha. That’s why many of the show’s later seasons are some of the best in the show’s history.