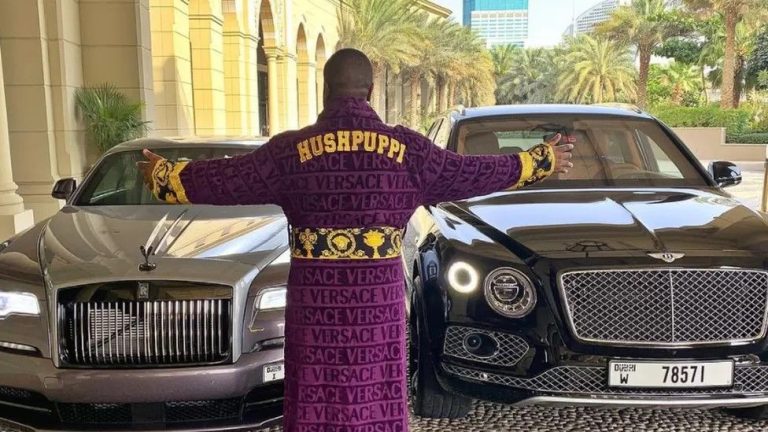 Instagram influencer, Ramon Abass aka Hushpuppi has been sentenced to 11 years and three months for his role in an international fraud syndicate.

He was jailed by the United States District Court sitting Central District of California for money laundering conspiracy through several online scams.

The judgment was delivered by Justice Otis Wright II, on Monday, and it found Hushpuppi guilty of the allegations including laundering proceeds of a school financing scam, business email compromise and other fraudulent cyber schemes levied against him.

Hushpuppi flaunted his wealthy lifestyle on his verified Instagram page which had 2.8 million followers until it was disabled by account was deactivated by Meta, the parent body of the social media platform.

He pleaded guilty in April 2021 to one count of conspiracy to engage in money laundering, 10 months after he was arrested in Dubai, United Arab Emirates (UAE), in June 2020.

Hushpuppi has remained in US federal custody since his expulsion from the UAE.

“Abbas bragged on social media about his lavish lifestyle – a lifestyle funded by his involvement in transnational fraud and money laundering conspiracies targeting victims around the world,” said United States Attorney Martin Estrada.

“Money laundering and business email compromise scams are a massive international crime problem, and we will continue to work with our law enforcement and international partners to identify and prosecute those involved, wherever they may be.”

Before its eventual ruling on Monday, the court postponed Hushpuppi’s sentencing date at least five times in 2022 alone.

Hushpuppi was initially scheduled for sentencing on 14 February but it was moved to 11 July and to 21 September before it was postponed to 3 November and finally to 7 November.

It had been reported last week that he had been sentenced to jail but it wasn’t until Monday that he was officially sentenced.

Abbas admitted to attempting to steal more than $1.1m from someone who wanted to fund a new children’s school in Qatar, court documents in California say.

The fraudster tricked his victim into providing funds for the school “by playing the roles of bank officials and creating a bogus website”, according to a statement from the then-acting US Attorney Tracy Wilkinson on the US justice department’s website.

Other suspects were allegedly also involved, the US justice department said, with Abbas playing a key role.

Abbas also admitted to “several other cyber and business email compromise schemes that cumulatively caused more than $24 million in losses”, the US justice department said.

“Ramon Abbas… targeted both American and international victims, becoming one of the most prolific money launderers in the world,” said Don Alway, the assistant director in charge of the FBI’s Los Angeles Field Office, in a court document on Monday.

“Abbas leveraged his social media platforms… to gain notoriety and to brag about the immense wealth he acquired by conducting business email compromise scams, online bank heists and other cyber-enabled fraud that financially ruined scores of victims and provided assistance to the North Korean regime.

“This significant sentence is the result of years’ worth of collaboration among law enforcement in multiple countries and should send a clear warning to international fraudsters that the FBI will seek justice for victims, regardless of whether criminals operate within or outside United States borders,” according to BBC report.

Abbas apologized for his crimes to Judge Otis D Wright in a handwritten note, saying he would use his personal funds to pay back his victims. He also said he had only made $300,000 from the crime he was being tried for.

He and another conspirator duped the businessperson into paying approximately $330,000 to fund an “investor’s account” to facilitate the loan.

He specifically directed the victim to send $100,000 to a bank account controlled by a co-conspirator, and $230,000 to the bank account of a luxury watch seller.

After the victim paid the money into the bank account, he used those funds for his personal benefit, including purchasing a $230,000 Richard Mille RM11-03 watch, which he arranged to have brought to him from New York to Dubai. The watch was frequently seen on his wrist on his now-defunct Instagram account, often with the hashtag #RichardMille.

Approximately $50,000 of proceeds from the scheme were used to fraudulently acquire a St. Christopher (St. Kitts) and Nevis citizenship and a passport for Abbas through a sham marriage to a St. Kitts citizen.

In January and February 2020, Hushpuppi and another conspirator corresponded with the victim businessperson, attempting to fraudulently induce a further payment of $575,000 in purported taxes to release the $15 million loan. In February 2020, the victim sent approximately $299,983 to Kenyan bank accounts specified by another conspirator. In March 2020, he fraudulently induced the victim to send another $180,000 to U.S.-based bank accounts; those funds were subsequently laundered with assistance from several co-conspirators.

“By his own admission, during just an 18-month period defendant conspired to launder over $300 million,” prosecutors wrote in a sentencing memorandum. “While much of this intended loss did not ultimately materialize, [Abbas’] willingness and ability to participate in large-scale money laundering highlights the seriousness of his criminal conduct.”

The FBI thanked the government of the United Arab Emirates and the Dubai Police Department for their substantial assistance in this matter.

Abbas will serve his sentence of 135 months in a federal prison.