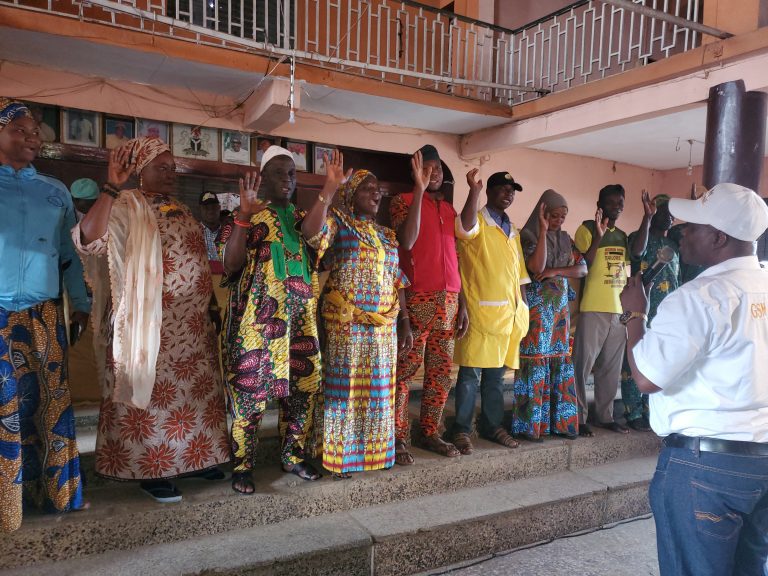 Olatubosun, who stated this at the inauguration of GSM Market and Artisans Marine at Saki Town Hall, Saki, noted that the present administration has been transparent and accountable to the people.

He also reiterated Governor Seyi Makinde’s commitment to doing more for the zone, if re-elected in 2023.

Olatubosun enjoined the people of Saki-East, Saki-West and Atisbo to disregard any “falsehood” by the opposition, adding that Makinde has fulfilled his campaign promises to Oke-Ogun residents.

During the engagement with Traders and Artisans in Saki-East, Saki-West and Atisbo Local Governments, Dr. Olatubosun said the Governor’s foray into politics was for service delivery and not for personal gain or deception.

Olatubosun who also spoke on the Broadcasting Corporation of Oyo State, Alaga sub-station and Gravity FM Igboho, assured Traders and Artisans that the governor would consolidate on his administration’s achievements in the last three-and-half years if re-elected.

Olatubosun said the Free Education policy of the present administration has been a huge achievement of the Makinde administration.

On Free Healthcare, Olatubosun said the Governor has instructed that a Primary Health centre must be functioning in each of the Three Hundred and Fifty-one wards in the State.

He further hinted that Two-hundred and twenty health centres have been completed throughout the State, while the remaining are on the verge of completion.

Speaking on the Security architecture in Oyo State, Olatubosun praised Governor Makinde’s wisdom in ensuring Oyo State is secured, despite the little resources in the State.

“Governor Makinde has also donated patrol vans to security agencies to enable them to provide effective security in the state,” he said.

He added that the state government would provide more patrol vans to ensure that the needs of the security agencies are met in overcoming the security challenges affecting the state.

He said recruiting new corps would enhance Amotekun’s performance and further deepen the security architecture of the state.

“The newly constructed Saki township road has given you a new lease on life. While the Ogbooro-Saki Township road is underway.”

He said these, amongst many other things are part of the Governor’s policies on Expansion of economy through agribusiness pillar.

Olatubosun also enumerated the Governor’s commitment to the welfare of civil servants and retirees, pointing at the continuous payment of their entitlements.

While the Chairman of Saki-West, Alhaji Omirinde who spoke through his Chief-of-staff, Alhaji Abdulahi, assured that the three Local Governments and the entirety of Saki Township would always support the Governor’s re-election bid.

He said Makinde’s policies have ameliorated the conditions of living of the people of Saki.

They said the Governor has shown unparalleled love for Traders, pledging their support for Governor Seyi Makinde-led administration.

The Traders’ Union leaders said that he had, in the last three years, shown purposeful leadership, especially by appointing one of them, Odunayo Kayode-Danjuma, as Special Adviser on Trade matters.

They therefore promised that members of the union would support the governor’s quest to ensure better service delivery to the people.

In his own remark, the People’s Democratic Party PDP chairman of Saki West who spoke on behalf of his colleagues at the federal constituency, Hon. Wasiu Ayenro urged residents of the towns to vote for Governor Seyi Makinde.

The President, Progressive Artisans, Alh. Salaudeen Quamorudeen and the President, Saki-West Artisans, Mr. Abdulraheem Ojolowo highlighted several developmental projects embarked upon by the State Governor, adding that the Governor has not reneged in his promises to residents of the State.

They therefore said all leaders of Associations had unanimously agreed to work for the present administration’s success.

Highlight of the Commissioner’s visit to the three Local Governments, was the inauguration of Saki-West, Saki-East, Atisbo GSM Market and Artisans Marine by the Honourable Commissioner.