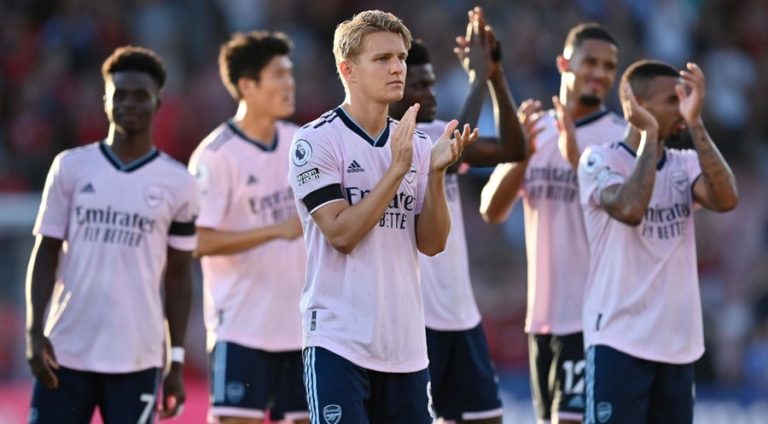 A beauty from Saliba and a double from Martin Odegaard took Arsenal to a 3-0 win at Bournemouth.

Saturday’s win made it three victories from three games for the early Premier League table-toppers.

The Gunners captain tapped in his first (5) after excellent work from star new signing Gabriel Jesus led to Gabriel Martinelli’s shot being parried.

The Norwegian hammered in a second (11) when Jesus’ heavy touch in the box teed him up.

But it was centre-back Saliba who stole the headlines with a sumptuous strike in the second half.

The Frenchman scored an own goal last weekend against Leicester but more than made up for that with a wonderful, curling effort which went in off the underside of the bar (54).

Speaking after the match, Arsenal manager Mikel Arteta said, “We expected a very difficult game from the beginning after seeing how Bournemouth started against Aston Villa and we wanted to avoid that type of game,” he says in a BBC interview. “We were really efficient in ball possession and in the box.”

On Gabriel Jesus’s wonderful play in the build-up to Arsenal’s opener. “That is something you don’t train,” he says. “He is playing with such talent. He was involved in two of the three goals.”

He goes on to say there is plenty of improvement in Arsenal’s play and says his players allowed Bournemouth to get too many crosses into their penalty area in the second half.

Martin Odegaard said, “It was really solid from start to the end,” he tells Sky Sports.

“We came out and dominated, made some good chances and scored some good goals. We know it’s always difficult coming to these places. We have struggled before but we were so sharp and aggressive. It was a good performance from start to finish.”

Arsenal’s captain goes on to praise the contribution of Gabriel Jesus. “He is not just about goals,” he says.

“He gives us so much in the play and he drops down to combine. He is brilliant and he is amazing to play with. We are lucky to have him here.”