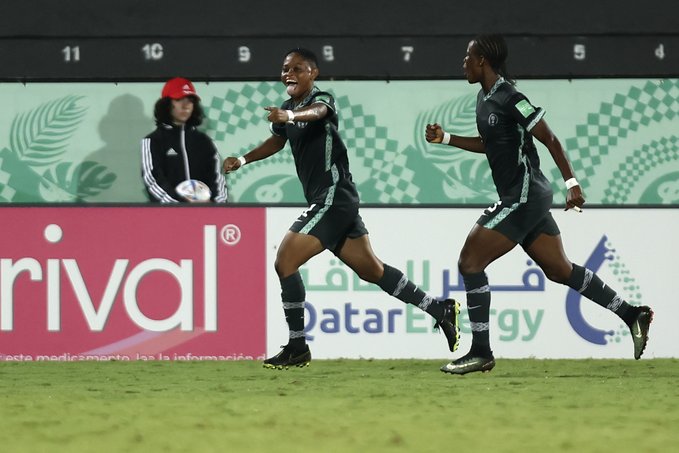 IBADAN, Nigeria (VOICE OF NAIJA)- Nigeria’s U-20 women’s team known as the Falconets, defeated Canada 3-1 in a group C fixture played in the early hours of Thursday, 18 August, 2022.

The Falconets will face the Netherlands in the quarter-final phase of the ongoing FIFA U20 Women’s World Cup taking place in Costa Rica on Saturday.

In spite of hard-fought victories over France and Korea Republic, the Nigerian side were favourites to win the match even though they had already secured a final eight place.

Falconets coach Chris Danjuma’s ladies had before now relied on late goals to secure slim 1-0 wins over France and the Korea Republic but the game against Canada was a completely different ball game.

Interestingly, it was the Canadian girls that drew the first blood, albeit from an error in the Falconets’ defence.

They did concede their first goal of the competition in the match, but they never looked back after drawing level thereafter.

“It was great for us to come back from that setback, and also concede first in the tournament. But we showed character and spirit after that, and that would be huge for us going forward in the competition,” team head coach Christopher Danjuma said after the match.

Esther Onyenezide, whose vicious curling shot earned all three points against the Korea Republic late on, to send the Falconets into the last eight Sunday, soon drew them level.

She scored from the penalty kick spot in the 24th minute after Canadian defender Mia Pante had handled the ball from a Blessing Okpe shot in the penalty box.

The Falconets did look composed and surefooted in the middle with the return of Deborah Abiodun, who sat out the encounter with the Koreans.

Chiamaka Okwuchukwu also played an inspiring game after starting for the first time in the tournament.

Her firm header from an Okpe cross in the 15th minute had missed narrowly.

Onyenezide however went on to shoot Nigeria ahead, also from the penalty kick spot, in the 32nd minute.

This was after Simi Awujo’s dangerous play against Mercy Idoko was penalised when Idoko went for a header from Rofiat Imuran’s inswinger.

In the added time of first period, Idoko came close to scoring her first goal of the tournament, but her touch from another Imuran inswinger brushed the upright.

In the second half, the Falconets added pace and brilliant use of space to their game.

It was no surprise then when Imuran, again with a visionary cross, set up substitute Chioma Olise for Nigeria’s third goal.