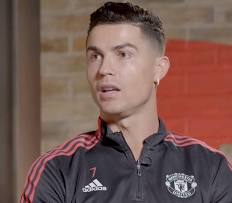 Cristiano Ronaldo has been warned by British police after footage emerged of the Manchester United star appearing to smash a phone out of an Everton fan’s hand at a match last season.

Officers launched an investigation after a video clip went viral online of Ronaldo knocking the young boy’s phone out of his hand as he limped off towards the tunnel.

The fan’s mother, Sarah Kelly previously claimed her son, 14-year-old son Jake Harding, was left “bruised” and “in complete shock” by the incident.

After the incident, the Portuguese forward apologised for his “outburst” and invited the supporter to watch a game at Old Trafford “as a sign of fair play and sportsmanship”.

Speaking about the Merseyside Police said: “We can confirm that a 37-year-old man voluntarily attended and was interviewed under caution in relation to an allegation of assault and criminal damage.

“The allegation relates to an incident following the Everton v Manchester United football match at Goodison Park on Saturday April 9.

A caution is not a criminal conviction and acts as more of a formal warning, which can be used as evidence of bad character if the person goes to court for another crime in the future.

To receive a caution, a person must admit to an offence and agree to be cautioned.