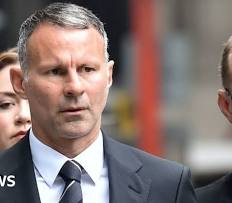 Former Manchester United star, Ryan Giggs on Wednesday, has described staying in a prison cell on the night of his arrest for allegedly assaulting his ex-girlfriend as ‘the worst experience of my life’.

In his domestic assault trial that resumed today, the 48-year-old former professional footballer, said he was ‘so scared‘ after being taken to Pendleton police station for allegedly headbutting Kate Greville during a row at his £1.7million mansion.

He also told jurors that during the row both he and Ms Greville fell to the floor after ‘slipping on shopping bags’ as he attempted to grab his phone. Giggs claimed she kicked him ‘six or seven times‘ in the head and that, after getting up, they engaged in a ‘tug-of-war‘ in which they ‘clashed heads‘.

The former Wales midfielder is accused of assaulting Ms Greville – who claims Giggs ‘deliberately‘ headbutted her – during the incident at his home in November 2020.

He is also accused of assaulting Ms Greville’s sister Emma – who was dog sitting on the night of the incident and who claims Giggs elbowed her after she tried to intervene.

He denies the charges, as well as using controlling and coercive behaviour towards ex Kate during their ‘toxic‘ six-year on-and-off relationship, and is currently on trial at Manchester Crown Court.

At the hearing on Wednesday, the court also heard how Giggs admitted to sending ‘flirtatious‘ messages to another woman during his relationship with Ms Greville.

Giggs also testified in his domestic violence trial that he and his ex-girlfriend Kate Greville filmed X-rated videos throughout their relationship.

When his attorney, Chris Daw QC, inquired about their sexual life, Giggs said, ‘It was the same as always. We had a healthy sex life and sometimes it could get rough.’

The party, which included cricket players, then travelled to Winter Wonderland in London’s Hyde Park, where they had a reservation for a table of 20 in the German beer hall.

Giggs told the court today that he started fighting with Ms Greville at the party after she accused him of “flirting.”

‘She wasn’t happy I was paired with a sport presenter, understandably. She didn’t know many people there. It would have been a couple of hours, having a few drinks.’

Giggs was asked why she was ‘uncomfortable’, prompting Giggs to say that the woman he was paired with ‘was an attractive lady’.

Giggs said that Ms. Greville afterwards accused him of flirting with the sportscaster, which he rejected, and that they argued over it. Mr Daw asked: ‘Had you (flirted) on this occasion?’

Giggs replied: ‘No. I was at one end of the table speaking to my agent and a few cricketers I knew and the other end were a group of girls who worked for the agency, and the sports presenter I mentioned.

‘I thought we were getting on fine. I said (to Kate) “Is everything OK?” And she said “No, not really,” which surprised me.

She just accused me of flirting with the girl which I was not. We were at opposite ends of the table. She said ‘you kept looking at her, I was watching you, you were definitely flirting’.’

The court heard that the December 2019 dispute escalated to an argument at the Stafford Hotel in London, when Ms. Greville alleged he hurled a laptop-containing bag at her head, kicked her out of bed, and expelled her nude into the hallway.

It comes after Giggs revealed in court yesterday that he is a ‘love cheat’ who can ‘never’ resist a beautiful woman, as he admitted to cheating on his first wife with Kate Greville after his ’very public’ affair with his sister-in-law.

The ex-footballer testified in court that he is a natural flirt who has “never” been loyal to any of his ex-girlfriends.

In a frank account of his romantic history, the ex-Premier League player revealed that he is “never” able to resist a beautiful lady, regardless of whether he is in a relationship or not.

He also told the jury that he had been unfaithful to his ex-wife, Stacey Giggs, during a ’very public affair’ – referring to his eight-year fling with his sister-in-law that resulted in her becoming pregnant – and a later entanglement with now ex-girlfriend Kate Greville, an affair he admitted allowed him to ‘have his cake and eat it’.

However, he vehemently denied ever assaulting Ms. Greville, who accused him of ‘headbutting’ her after an altercation at his £1.7 million property.

When asked whether he had ever abused a female, Giggs said, “No.”