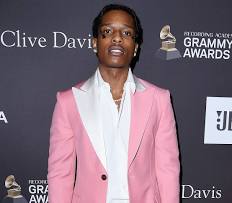 American rapper A$AP Rocky, on Wednesday, pleaded not guilty to shooting a former friend and music partner during an argument.

The charges arise from an altercation in Hollywood last November 6 between Mayers and Ephron – whose stage name is ASAP Relli and who was a member with Rocky in the ASAP Mob rap group that started in Harlem in 2006.

Prosecutors say that during the argument, Mayers pointed the handgun at Ephron, then fired it twice toward him, injuring his hand.

Ephron this week filed a civil assault and battery lawsuit in LA against Mayers in which his attorneys say that Mayers, ‘pulled out a handgun and purposefully pointed it in the direction of (Ephron) and fired multiple shots.’

The rapper pleaded not guilty at his criminal court arraignment on Wednesday in downtown Los Angeles.

When Judge Victoria Wilson asked Mayers how he wanted to plead today, his attorney, Sara Caplan, entered a plea of ‘not guilty’ to both charges.

The rapper whose real name is Rakim Mayers is charged with two felony counts of assault with a semiautomatic firearm.

She also issued a protective order, meaning that Mayers must not ‘attack or harass’ his alleged victim – fellow rapper Terell Ephron – or contact him or come within 100 yards of him.

Judge Wilson also ruled that Mayers could not ‘own or possess’ any firearms and ordered him to hand in any guns he already has.

In court today, attorney Caplan asked that the protective order the judge issued against Mayers be ‘mutual’ – that Ephron should also be ordered not to attack or harass Rocky and stay 100 years away from him – because Mayers ‘is also in danger.’

But Judge Wilson restricted the protective order to apply only against Mayer and told Caplan that if a case was subsequently brought against Ephron ‘we can deal with that then’.

Mayers was arrested April 20 at LAX airport as he stepped off a private plane from Barbados where he had been on vacation with then-pregnant Rihanna, 34.

Cops held him for a few hours on suspicion of assault with a deadly weapon, then released him on $550,000 bail and sent the case to the LA District Attorney to prosecute.

He is facing up to four years in jail on each charge if he’s convicted.