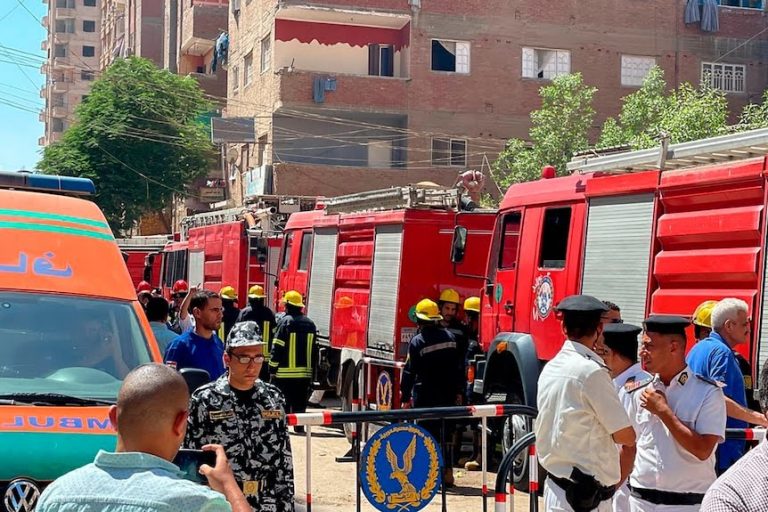 A fire has killed at least 18 children and 23 adults in an Egyptian Coptic Christian Church during a morning mass on Sunday, 14 August, 2022.

The hospital documents show the children were ages 3 to 16.

The small church is located in the highly populated Imbaba neighborhood, a working-class district west of the Nile River, part of the Giza governorate in greater Cairo.

Copts are the largest Christian community in the Middle East, making up at least 10 million of Egypt’s 103 million Muslim-majority population.

The fire started at about 9 a.m. local time, due to an electrical failure in an air conditioning unit on the church’s second floor, Egypt’s Interior Ministry said.

At least two officers and three civil protection service members were injured while responding to the fire, the ministry said.

Archpriest Moussa Ibrahim, a spokesman for the Coptic Orthodox Church, told AP that a set of five-year-old triplets, their mother, grandmother and an aunt were among those killed.

A priest at the church, Abdel-Messih Bekhit, was also among the dead at the hospital morgue.

Twenty-one bodies were taken to other hospitals, adding that church officials also believe the fire was accidental.

Egypt’s Coptic community and churches have been a target of religious-based violence and attacks historically, with persecution and discrimination spiking since the toppling of Hosni Mubarak’s regime in 2011.

“We are in continuous contact with the local authorities and the Health Ministry,” the head of the Coptic Church, Pope Tawadros II said, according to the church spokesperson.

Witnesses to the Sunday morning fire described people rushing into the multistorey house of worship to save those trapped, but rescuers were soon overwhelmed by heat and deadly smoke.

“Suffocation, all of them dead,” said a distraught witness, who only gave a partial name, Abu Bishoy.

“Everyone was carrying kids out of the building,” said Ahmed Reda Baioumy, who lives next to the church.

“But the fire was getting bigger and you could only go in once or you would asphyxiate.”

Youssef Islam, 16, who works at a bakery next door to the church said the worst of the flames were on the fourth floor.

He said he ran into the church and intended to get water from the third floor to help put out flames on the floor above.

But when he forced his way through a door, he saw children’s bodies piled on top of each other.

“A horrible scene,” he said. “This was probably the nursery.”

Maher Murad said he left his sister at the church after prayers.

“As soon as I got away from the church by only 10 metres, I heard the sound of screaming and saw thick smoke,” he said.

“After the firefighters doused the fire, I recognised my sister’s body. The bodies were all charred, and many of them are children who were in a nursery room in the church.”

Witness Emad Hanna said a church worker managed to get some children out of the church’s two daycare facilities.

“We went upstairs and found people dead. And we started to see from outside that the smoke was getting bigger, and people want to jump from the upper floor,” he said.

Sunday morning’s blaze was one of the worst fire tragedies in Egypt in recent years.

Due to Egypt’s dilapidated and poorly maintained infrastructure, accidental fires are not uncommon in the sprawling megalopolis of Cairo, where millions live in informal settlements.