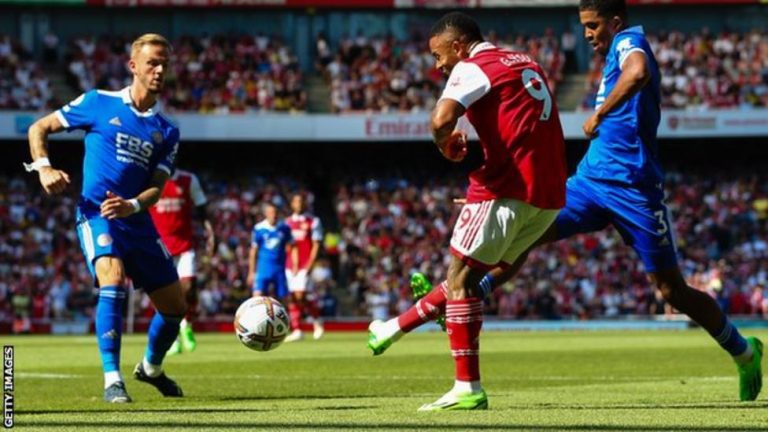 The impressive Gabriel Jesus scored his first Premier League goals for Arsenal as Mikel Arteta’s side beat Leicester City in an entertaining encounter at Emirates Stadium.

The Brazilian striker, signed from Manchester City in the summer, scored twice before the break and missed several chances for a hat-trick as well assisting his side’s other goals

James Maddison again reduced the arrears, only for Gabriel Martinelli to quickly made it 4-2 as the Gunners maintained their 100% start to the season.

Leicester were awarded a penalty before half-time when Jamie Vardy and Arsenal goalkeeper Aaron Ramsdale collided, but the decision was overturned by referee Darren England after consulting with the video assistant referee.

After scoring, Jesus was twice thwarted by Leicester keeper Danny Ward before half-time, and the 25-year-old also hit the side-netting from close range with 10 minutes of the game to go.

While Jesus was never quite a second fiddle at City, where he scored 58 times in the Premier League, he is clearly relishing being the focal point of Arteta’s plans in north London.

He showed off different aspects of his talents on his home debut, producing a superb chip to open the scoring before showing more predatory instincts to latch on to a defensive header from Vardy to nod past Ward for his second.

Jesus was denied by Ward’s boot with his next chance and then stayed on his feet when he could easily have won a penalty under pressure from Jonny Evans, only to roll his shot just wide of the post – and all before the sides had returned to the dressing rooms for a break on a roasting hot day in the capital.

His neat touches set up Xhaka and Martinelli’s goals, yet Jesus will regret missing out on what would have been his second Premier League hat-trick when he shot into the side of the goal from close range.

His best league return for City was 14 goals in the 2019-20 season, but now installed as first-choice striker under Arteta, he could surpass that in an Arsenal set-up that promises to be highly entertaining.

The only question marks for the hosts were how they conceded when seemingly in control, but each time they hit back inside two minutes to suggest they have resilience as well flair.