Wike Can’t Dump Party, He Has Invested So Much – PDP 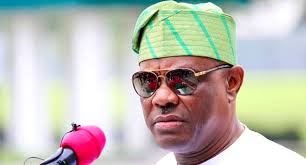 ENUGU, Nigeria (VOICE OF NAIJA)- The Peoples Democratic Party, (PDP), has jettisoned the claims that the Rivers State Governor, Nyesom Wike, is planning to dump the party.

The party’s National Publicity Secretary, Debo Ologunagba, described Wike is an important and loyal member of the party.

Ologunagba said the Governor Wike had invested so much in PDP to think of dumping the party.

Wike has been aggrieved since the PDP’s presidential primary that produced Atiku Abubakar as its flagbearer.

Wike is believed to be aggrieved that Atiku ignored him and picked Governor Ifeanyi Okowa of Delta State as his running mate.

He had been associating with chieftains of the All Progressives Congress, APC.

This led to the speculations that Governor Wike may dump PDP or work against the party in 2023.

“He has said in so many fora that he is a committed party man and has remained loyal to the party since inception.

“Before the presidential primaries which he contested, he told the whole world that he was ready to respect the outcome of the elections. I have no evidence that he has changed his mind.”