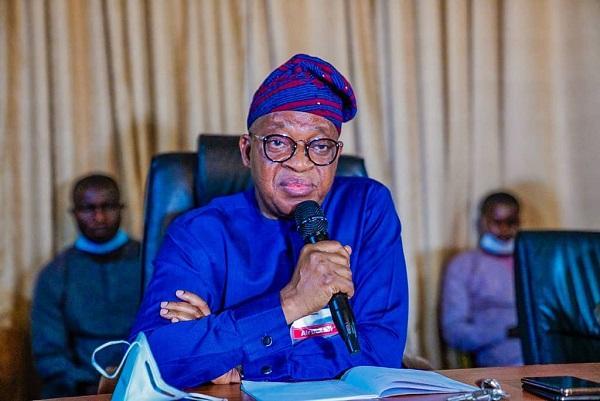 IBADAN, Nigeria (VOICE OF NAIJA)- Osun State Governor Adegboyega Oyetola and his party, the All Progressives Congress (APC), on Friday filed a petition before the Election Petition Tribunal sitting at the State High Court, Osogbo.

The petition was filed following the outcome of the July 16 governorship election in the state.

The petitioners challenged the results of the election in some of the Local Government Areas and prayed the Tribunal to return their mandate to them.

This is even as the first petitioner, Governor Oyetola was physically present at the Tribunal to sign the petition filed before the tribunal.

Recall that the Independent National Electoral Commission (INEC) had declared Senator Ademola Adeleke winner of the July 16 governorship election having polled a total number of 403,271 against 375,027 polled by Governor Adegboyega Oyetola.

Addressing journalists shortly after the petition was filed, one of the petitioners’ Counsels, Mr. Kunle Adegoke (SAN) expressed confidence in the substance of the petition to ensure victory for Governor Oyetola and the ruling party.

“We’re here to file a petition on behalf of Governor Adegboyega Oyetola and the All Progressives Congress (APC) in respect of the July 16 governorship election in the State.

The petition has been filed and received by the registry of the tribunal.