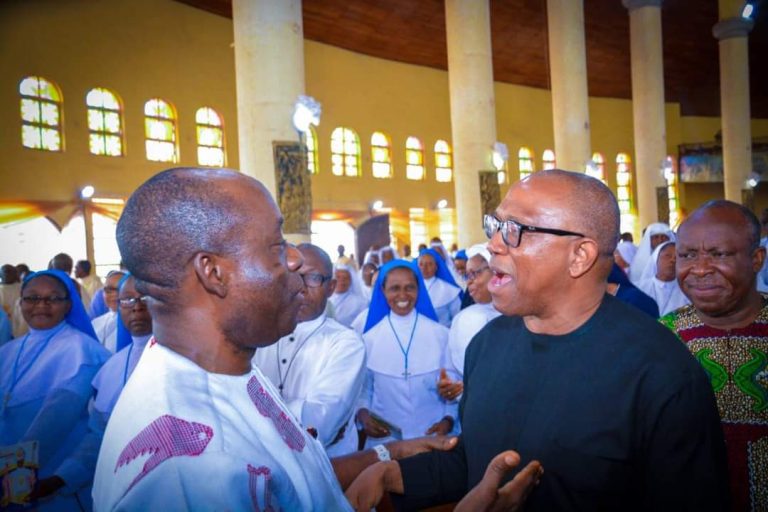 The duo met during the Thanksgiving mass for Most Rev. Paulinus C. Ezeokafor in celebration of his 70th birthday.

Just before the mass started, Soludo stepped out from his seat and walked over to where Obi, the former Governor of the state was seated to greet him, welcoming him to the Capital city.

One striking reaction from spectators Is that “even amid so many political disagreements, they both understand they are Ndi-Anambra”.

Obi and Soludo were seen embracing each other, while they exchanged pleasantry.

Recall that Soludo, the former Governor of the Central Bank of Nigeria (CBN), had earlier alleged that the investment of Obi in Anambra state government is worth next to nothing.

Soludo made this assertion in an interview with Channels TV’s Politics Today on last Thursday.

Also, when he was asked his perspective on government investing outside the public sector with reference to Obi as former governor in Anambra, Soludo simply said, “I don’t know about the investment.”

According to Soludo: “Our interview is about the 2023 budget. I’m not talking about investments of any of my predecessors. By the way the one that you talked about I don’t know about that.

“I think there was something I read about somebody speculating about whatever investment. With what I’ve seen today, the value of those investments is worth next to nothing. So, let’s leave that aside.”