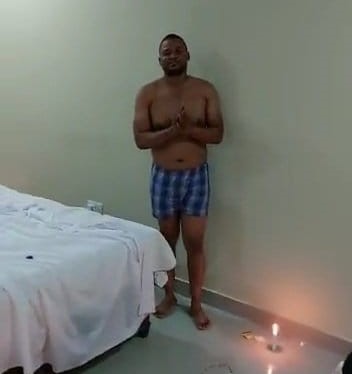 IBADAN, Nigeria (VOICE OF NAIJA) – The pregnant woman who was caught by her husband, sleeping with her pastor in their matrimonial bed is dead.

Recall that a video had surfaced online on Thursday, 17 November.

In the video, the distraught husband caught his wife identified as Martha, butt-naked with the pastor and immediately turned on his phone camera and started recording the adulterers as he condemned the woman.

The pastor could be seen frantically putting on his underwear in a bid to conceal his nakedness while the pregnant wife who showed instant remorse was trying to get close to her angry husband to beg him but the man wasn’t listening at that point.

Fetish items such as calabash, gourd, red and black material, burning candles and what looks like a pot can be seen in the centre of the room.

The video shared on Twitter had caused uproar in the social media platform, with many tweeps shocked to see a pregnant woman cheating.

Big Brother Naija star and mother of one, Tega, had a different perspective about the video as she advised the husband to pray earnestly for his wife because she’s under the devil’s influence.

The reality star wrote: “Go down on your knees and pray, ask God to intervene and bring her back to her senses, it’s the work of the devil, so not give the devil a chance, keep praying pls, don’t let the devil take what belongs to you.”

However, in a latest development on the story, Martha reportedly killed herself after the video went viral.

The news of her death just like the viral sex tape has sparked controversy on Twitter, with many tweeps blaming the husband for her death while others have different opinions.

A tweet, @itsShola said the husband should be applauded for not having stroke after the incident.

“So Martha ended her Iife after a video of her cheating on her husband while pregnant went viral. For every action, there are consequences, she couldn’t handle the consequences obviously. Y’all need to stop blaming the innocent husband, it’s her fault. She’s the eviI one here.

“I even believe the husband should be applauded here; The fact that he is even still alive and doesn’t have stroke yet should be applauded. A lot of men would have ended it if it happened to them. It’s really too much for a man to handle.

“He could have hit her on the scene, or even the pastor, as hard as it was, he controlled himself. This man shouldn’t be getting no blames here.

“The man’s family needs to stay close to him, they need to put a close eye on him.”

Another tweep, @commytush agreed with @itsShola. She said Martha and her dead child shouldn’t rest in peace.

“Oh yes, the husband should be applauded. Martha and her dead child shouldn’t rest in peace, they don’t deserve it. Why will Martha cheat? Committing a very wicked, terrible and unknown sin.
No peace for her, drag her.”

@Zainab_ex tweeted: “The way women run away from accountability ehn! Look at them in the comment section already blaming the man.

“She decided to commit suicide(allegedly) after embarrassing herself and her family & somehow the blame goes to the man who was hurt????

“When she was sleeping with a pastor in her matrimonial bed, she didn’t for once think her husband could also commit suicide abi???

“This is exactly what happens when things that shld’ve been settled internally is posted on SM for online inlaws to ve a say. What she did was very bad but posting it online for us to see is what I don’t understand. No she’s dead with a child, I hope baba is happy,” @Mazipita said.

@LawsonAqueela wrote: “What Martha did was awful. It was wrong. But some of you should be honest with yourselves, you’re supporting the husband’s decision to post the video on SM because of course, now there is gist, a victim and an opportunity to post fear women.

“It was a marital issue. There are various way of resolving marital issues than leaking your wife’s sex tape. That’s just giving “childhood dating” vibes. There is counseling, there is therapy, there is divorce, you can take her to her parent’s house,show them the video and end it.”

@nayathegorgeous on her part, said: “As expected. When I saw that video, I thought of so many things. I thought of she would be able to live after the humiliation. What she did was really wrong, no respect for her husband and unborn child. At the same time, I thought of her husband. I don’t think he loved her.

“I don’t think anyone who truly loves you will want to embarrass you like that in public. It was utterly disrespectful to him, heart breaking, but bringing it online?? With her naked? How was that the first thing he thought of? How is it that he didn’t beat the “pastor” up there?

“I don’t think anyone would live through such public humiliation. People dragged her, said a lot of things, the pastor was almost left out of the crime. There was no way she would have stayed sane 😅.”