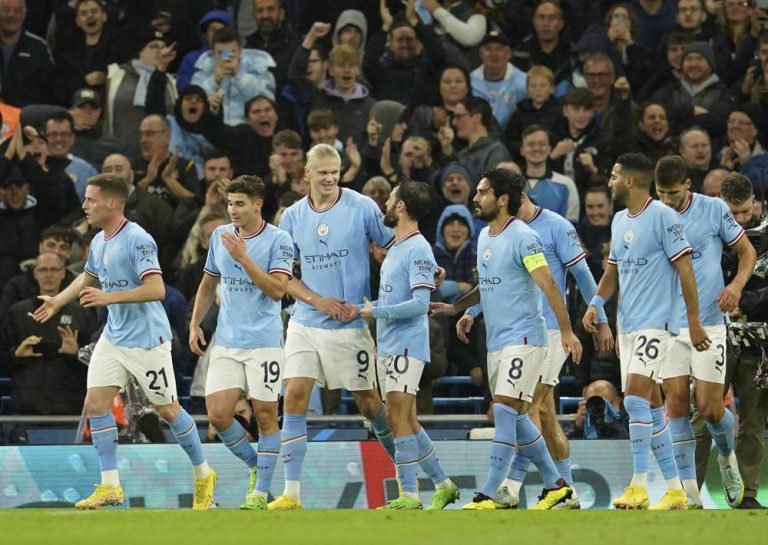 Norwegian striker Erling Haaland was denied an almost-certain second hat trick against Copenhagen in the Champions League on Wednesday.

The Norwegian struck two first-half goals in the Group G match to take his season’s total to 19 in 12 games in all competitions.

But he wasn’t to score a fourth treble of the campaign as Guardiola withdrew him at half time, with City leading 3-0 and the contest effectively over.

Haaland, who hit three in the 6-3 win against Manchester United on Sunday, had to watch on from the sidelines as City continued its demolition of the Danish champion.

Riyad Mahrez scored from the penalty spot 10 minutes into the second half after Marko Stamenic brought down Aymeric Laporte.

City could and should have added several more goals, with Jack Grealish repeatedly coming close either side of the interval – but Julian Alvarez made it 5-0 when turning home Mahrez’s cross in the 76th minute.

The Premier League champion was in front after just seven minutes — Haaland powering a first-time shot past Kamil Grabara after good work from Joao Cancello.

He doubled the lead in the 32-minute – tapping into an empty net after Sergio Gomez’ shot was parried by Grabara.

It looked like Haaland had completed his hat trick when City made it 3-0 six minutes before halftime – but Gomez’s effort was diverted over the line by Copenhagen defender David Khocholava with the striker set to pounce.

It was harsh on Grabara, who had ensured his team escaped a heavier defeat with his a string of impressive saves.