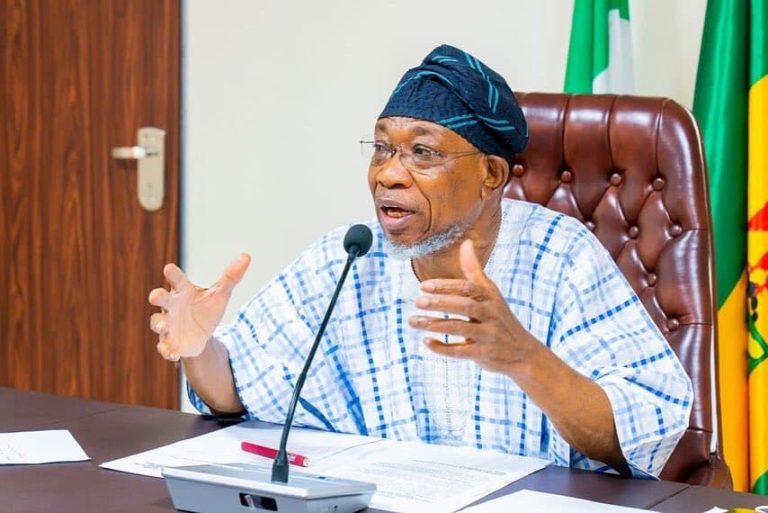 LAGOS, Nigeria (VOICE OF NAIJA)- The Special Envoy on Diplomacy & Good Governance of the International Peace Commission of the United Nations (UN), Amb. (Dr) Hussaini H. Coomassie has insisted that the Nigeria Immigration Service (NIS) is consistently shortchanging and deceiving unsuspecting Nigerians in the issuance of passports across the country.

Amb. Coomassie specifically fingered the Interior Minister, Ogbeni Rauf Aregbesola and other senior management of Immigration Service including a rtd CGI, as being responsible for making issuance of Nigerian passport a nightmare.

In a chat with journalists in Abuja, Amb. Coomassie who is also the immediate past Deputy National Coordinator, North & Diaspora, Buhari Campaign Organisation, said should President Muhammadu Buhari refuse to step in and clear the rot in the service, he will have no choice but to drag the minister and management of the service before a competent court in the land.

“Immigration isn’t just for passport insurance to Nigerians alone, it impacts foreigners wellbeing, Investment opportunities, all the windows are hanging on the shoulders of immigration. So if the Nigeria immigration fails, the president’s efforts to woo in foreign investments will continue to suffer serious setbacks.

“For expatriate quota to register with the Combined Expatriate Residence Permit and Aliens Card (CERPAC), which permits you to work in Nigeria legally, the fee has been inflated to $2000 from $500, how can a low budget investor come into the country to invest? Also, for prospective mega investors who come with 30-50 investors. How do you expect them to pay $2000 each?

“We have some elders in this government that are bent on bringing down this government by making policy decisions that are detrimental to it’s objectives. When President Buhari leaves power and certain things are revealed to him, that these things actually happened under his watch, that cry he cried before he became president, will be a child’s play. Because he will be shocked of what transpired under Mr integrity.

“The train to Kaduna has stopped while the train to Kano project is on slow motion, why cancel because of his critique. There’s insecurity going on in Borno and the Governor is busy Building Schools and other infrastructural development. Is insecurity not there in Afghanistan, is there in Iraq and the people are busy building roads and other infrastructures. Our insecurity are politically motivated by the unscrupulous class who want to be using it to be making money .

“The minister of interior has extended Aisha’s tenure with one year as member of the board. She’s somebody I know and respect very well but when somebody does something out of order, if the person does something wrong, whoever it is, I would come out and speak. It is not only happening in the north or in the South, it is happening everywhere. The highest bidder takes it all, or what credentials or criteria did they use in appointing her?

“The minister of interior, Ogbeni Aregbesola has gone beyond his policy making, and is involving himself in operational activities of regimental AGENCIES such as immigration that has a substantive CGI appointed by Mr President, your own, Sir, is to make genuine policy that will favour Nigerians and supervise the heads of those Agencies under you judiciously and definitely not to make yourself operational. Someone else is charged with such responsibility please, if I may ask. What is the minister doing in passport offices in the name of operational or fact finding visits, is he the CGIS?” He asked.
The Minister is even bias, could you imagine the entire south west region have enhanced passport machines fully installed, but only few states in the entire 19 northern states benefited from that so called enhanced passport production points, even katsina the home state of Mr PRESIDENT is yet to benefit from it.
AREGBESOLA is now in charge of posting Immigration Comptrollers, Passport Control officers and even foreign postings as if the Service is Osun State where he hire and fire at will.

While chiding retired personnel of the service to speak up, the former immigration officer stressed that things must not get bad before eminent personalities will begin to speak.

‘The president has to come in and stomp on it. enough is enough, we don’t need that policy, it’s a clear scam and will never favor Nigerians, they’re using our money to produce the passports hence the delay in capturing and another delay in production, the company contracted or charged with the responsibility of producing the passports abroad (Malaysia) have fraudulent clause, that unless they print about 40 million copies or so before the contract can be reviewed or elapses. But the problem here is that the company is financially down therefore they cant even produce 10,000 booklets with their money until Nigerians make payments for the passports then it allows them to give you 2 to 3 months time frame for capturing, so that they can secure enough room to produce the meagre 10,000 booklets weekly with the funds so collected. Clearly not, they don’t have the financial capacity to effectively deliver. The money you and I are paying are the same money they take to produce the passports, that is why their supply is usually 10,000 weekly. What an intelligent fraud.

“With their game play, there is no way Passport booklets can be supplied enough to satisfy the demands of passport offices in Nigeria and the Diaspora. As I’m talking to you now Nigerians are stranded in Zambia, Kenya, Malaysia and some parts of Europe as a result of AREGBESOLA’S ineptitude with regard passport policy. It will never be enough, the company producing the incapable.
Statistical facts revealed, immigration office in Ikoyi alone, Lagos state need almost 40,000 booklets to clear backlogs, while Alausa & Festac requires 20,000 each. We have 37 states in this country and Abuja, some states have 2-3 passport offices and they need nothing less than 20,000 booklets to clear their backlogs, we need nothing less than 1,000,000 booklets on ground or minimum of 500,000 to clear all the backlogs. It is very simple, if they go against this worthless policy and do mass production, pump in enough money, give each passport office atleast 100,000 booklets.

“Give them a maximum of one week, work Monday to Sunday and see whether the backlogs won’t be cleared. But they close their mouth and the officers cannot talk, because they are scared to lose their jobs or to be removed from their positions. So I believe we have credible people that are more capable and are doing fine. Things need to change and I won’t stop talking,” he added.

An investigation conducted by KAKAAKI REPORTERS, revealed that Smart Technology Nigeria Ltd works in partnership with its parent company Leis Corporation based in Kuala Lumpur, Malaysia where e-passport and enhanced passport are produced.

It was gathered that the Service providers for the Nigeria international passport are based in United Kingdom. Socket Works Global Ltd which is now known as New works Ltd and Green Washington.