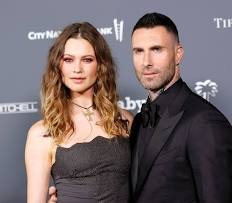 Three more women have come out to expose Maroon 5 singer, Adam Levine, after Instagram model, Sumner Stroh, claimed to have had a physical relationship with him.

The accusations emerged after Levine apologized for his actions due to his conversation with the Instagram Influencer.

Models Maryka and Alyson Rose are the other two accusers of Adam Levine’s flirty exchanges while messaging on Instagram, with the Maroon 5 singer even telling one of them: I shouldn’t be talking to you, you know that right?

With her responding that if they were only friends that could be appropriate, Alyson Rose shared in a since deleted TikTok.

She claimed she had many more messages but had decided not to share them as she didn’t feel comfortable doing so, adding she feels really bad for Levine’s wife.

On the other hand, Maryka, who’s also a comedian, said on her Instagram stories that Levine slided into her DM’s and told her that he was now obsessed with her.

To which Maryka replied, Dude aren’t you like married, with the singer allegedly responding that indeed he was married but it was a bit complicated.

And in one message Adam Levine allegedly tells her to distract herself by f**king him.

Zabel is the fourth woman to accuse the Maroon 5 singer, of sending her flirty messages.

Alanna Zabel took to her Instagram Stories on Tuesday, 20 September, to make the revelation after three women had released screenshots of the flirty chats they received from Adam Levine.

Zabel, who said she worked for Levine from 2007 to 2010, alleged the singer told his friends she had the “best ass in town and it was cute.”

“One day he texted me saying, ‘I want to spend the day with you naked,'” she further claimed.

Alanna Zabel alleged that the shocking message led to a physical altercation with her then-boyfriend.

After her post about Levine went viral, Zabel then appeared to backtrack by coming to his defense.

“Firstly, Adam’s text was not wrong, IMO [in my opinion],” she wrote on Wednesday in the caption of a video of her and Levine practicing yoga together on Instagram.

She then added, “Secondly, Adam was not responsible for my abusive ex boyfriend, or his actions.”

Zabel explained that the reason she decided to come forward was that she was “disappointed” by Levine’s response to other allegations made about him.

She wrote: “When you look at the Cause and Effect that came from Adam’s one text, either flirtatious or mis-sent, we can see how cautious and mindful we should be with our actions, and how they affect others.”