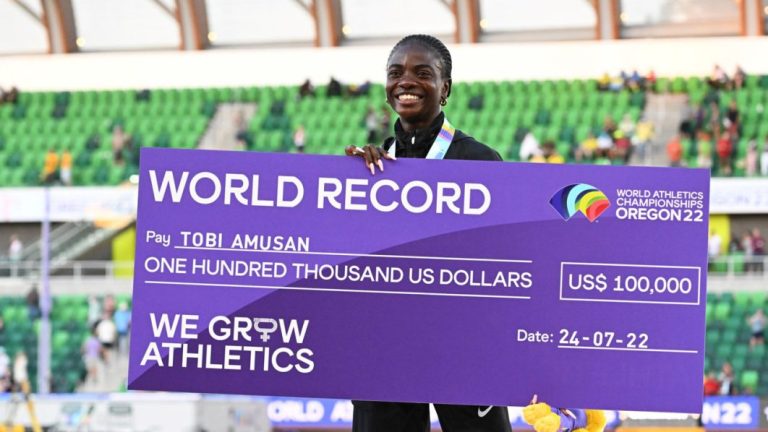 The International governing body for the sport of athletics, formerly known as IAAF, has ratified the world record set by Tobi Amusan in the women’s 100m hurdles semi-final at the World Athletics Championships in Eugene, Oregon, the United States, in July.

The World Athletics confirmed Amusan’s mark alongside the world records of two other athletes – Mondo Duplantis and Sydney McLaughin.

This was disclosed on Tuesday in a statement published on the athletics body’s official website.

“The world records set by Tobi Amusan, Mondo Duplantis and Sydney McLaughlin at the World Athletics Championships Oregon 22 have been ratified,” the statement reads.

Amusan’s time supplanted the 12.20 seconds set by Kendra Harrison in 2016 at the London Müller Anniversary Games.

The 25-year-old was, however, not done as she followed that remarkable performance with a wind-assisted 12.06 (2.5m/s) to win the final.

“The goal was to come out and to win this gold, Honestly, I believe in my abilities, but I was not expecting a world record at these championships,” a surprised Amusan had said in an interview after her record-breaking run.

Amusan became the first Nigerian world champion in the history of the World Athletics Championships. She is also the current African and Commonwealth Games champion and record holder.

The 25-year-old was recently honoured with the national award, Officer of the Order of the Niger (OON) by President Muhammadu Buhari.