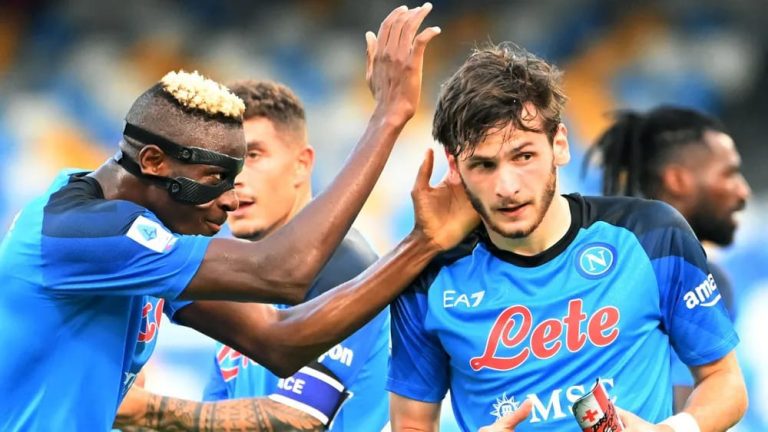 The Nigerian international was named in the starting XI against the newly promoted side.

He was named after having found the net when the Parthenopeans smashed Verona 5-2 in their previous Serie A fixture.

Osimhen justified Luciano Spalletti’s faith in him by doubling the advantage at the Diego Maradona Stadium in Sunday’s Italian elite division match.

Khvicha Kvaratskhelia had given Napoli the lead after 35 minutes before the Super Eagle scored on the stroke of half-time – slotting the ball past goalkeeper Alex Meret – after he was set up by Andre Zambo Anguissa.

Two minutes after the hour mark, Kvaratskhelia completed his brace to hand Luciano Spalletti’s side a three-goal lead.

In the 68th minute, Andrea Petagna thought he had reduced Monza’s deficit with a fine header, albeit, it was chalked off after VAR replays.

Substitute Min-jae Kim added the fourth in the 93rd minute after profiting from a pass from Piotr Zielinski.

After featuring for 84 minutes, Osimhen was subbed off for Algeria international Adam Ounas, whereas, Zambo Anguissa saw every minute of action.

As things stand, Spalletti’s side leads the Italian elite division log with six points from two matches played so far.

“I’m happy with my goal but most importantly because we won,” Osimhen told the media after his effort against Verona.

“We needed to get off to a good start for team morale at the start of this new cycle.

“It shows we’re still a great team and that we’ve signed some talented players.

“The lads are helping me a lot and [Luciano] Spalletti has great confidence in me.

“[Kvitcha] Kvara[tskhelia] scored a good goal – and just before then I said he was going to score! He’s a top-quality player but we have strength and quality throughout this squad.”

The former Lille goal machine would be hoping to make it at least three goals in three outings when his team square up against Fiorentina on August 28.

Ultimately, Osimhen would aim at overtaking his goals feat during his season in Italy – where he scored 14 times in 27 fixtures.