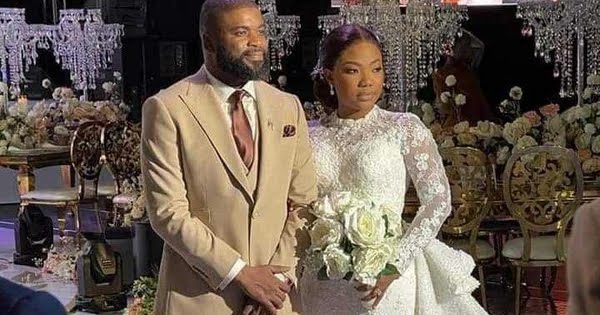 LAGOS, Nigeria (VOICE OF NAIJA)- Nigerian gospel artist, Mercy Chinwo, has tied the knot with her boo, Pastor Blessed Uzochikwa and it was all shades of beautiful!

On Friday, the gospel singer, wed Pastor Blessed, who is a resident pastor of The Waterbrook Church in Port Harcourt, Rivers State capital.

Mercy was such an exquisite Rivers and Delta bride as both cultures were beautifully merged.

Celebrities including Nollywood actress, Adesua Etomi Wellington and her hubby, Bankole Wellington a.k.a ‘Banky W’ were present as part of the groomsmen.

On Saturday, 13 August, 2022, the couple said “I do” in a beautiful church wedding ceremony.

From the outfits to the vibes, colours and chemistry…. The couple’s wedding was one for the books!

Dressed in a beautiful flowing dress, the music star walked down the aisle to her to the admiration of the dignitaries in attendance.

The music star shed tears as she walked into the church in the company of her relative.

The groom was dressed in a grey suit and dark shades and supported by his best man, Nigerian music star, Banky W.

A grand reception was later held at an event centre in the city.

It would be recalled that the music star got engaged in June.⁣

“I am blessed to be blessed with @theofficialblessed ❤️ The thoughts of doing the next phase and the rest phase of my life with you makes the blessing more real💃 I love you Sweet❤️,” she wrote.⁣

The gospel singer and songwriter released her first single, “Testimony”, in 2015, and “Igwe” a year later.⁣

She has also had a stint in acting.⁣

She landed her first film role in Yvonne Nelson’s film, ‘House of Gold‘ where she acted as Lucia, starring alongside Yvonne Nelson, Majid Michel and Omawumi among others.⁣