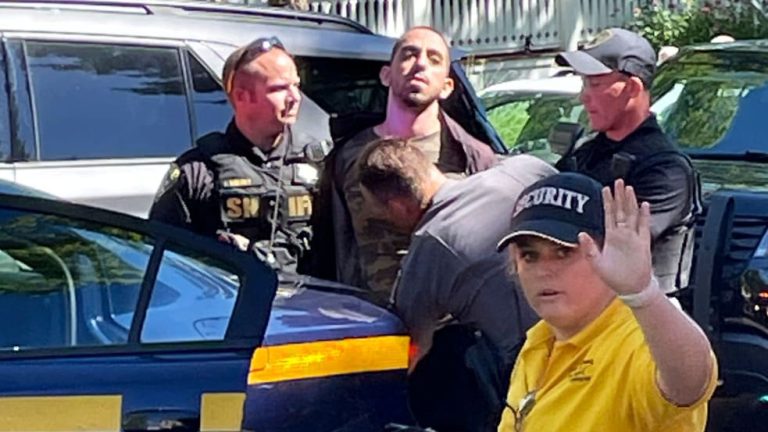 The 24-year-old man, Hadi Matar accused of attacking ‘The Satanic Verses’ author, Salman Rushdie on Friday has been charged with attempted murder.

He was arraigned on the charges on Friday evening and has been remanded in Chautauqua County without bail.

“Immediately after the attack, I was on scene to view the evidence in order to determine what needed to be further developed and preserved for prosecution,” Schmidt said in a press release announcing the charges.

“We are working closely with State Police, our local police agencies, and federal law enforcement partners to fully develop the evidence.

“We have been in touch with our counterparts in the State of New Jersey where the attacker is from to share information and assist them in helping us to better understand the planning and preparation which preceded the attack so that we and the different agencies involved can determine what, if any, additional charges should be asserted.”

“This is the very early stage of what will invariably be a protracted legal process. We will try to be as transparent as we can without compromising the case,” he added.

The grim incident began on Friday morning, when New York State police say Matar rushed Rushdie just as he was about to begin a talk on the U.S. being an “asylum for writers and other artists in exile” at the non-profit education center and summer resort near Buffalo.

According to eyewitnesses, moments after Rushdie sat down, Matar jumped on the short stage and began to punch and stab the author.

Rushdie was stabbed twice—once in the abdomen, once in the neck—was taken by helicopter to a hospital.

Henry Reese, the co-founder and president of City of Asylum in Pittsburgh, which was founded to provide sanctuary to writers exiled under threat of persecution, was interviewing Rushdie and suffered “a minor head injury” during the attack.

Police say that a state trooper assigned to the event “immediately took the suspect into custody.”

“Everyone was shocked,” Marion Baumgarten, who attended the talk with her husband, told The Daily Beast on Friday. “Many people in the audience were crying.”

On Friday evening, his agent said Rushdie was on a ventilator and unable to speak about the attack.

“The news is not good,” Andrew Wylie wrote in an emailed update.

“Salman will likely lose one eye; the nerves in his arm were severed; and his liver was stabbed and damaged.”

While authorities have not provided many details about the motivation behind the attack, State Sen. George Borrello, who represents the district where Rushdie was attacked, said in a Friday statement that authorities believe Matar was motivated “by fundamentalist extremism.”

An official for the Iran-backed armed group, Hezbollah, told Reuters on Saturday they don’t “know anything” about Matar’s attack and declined to comment further.