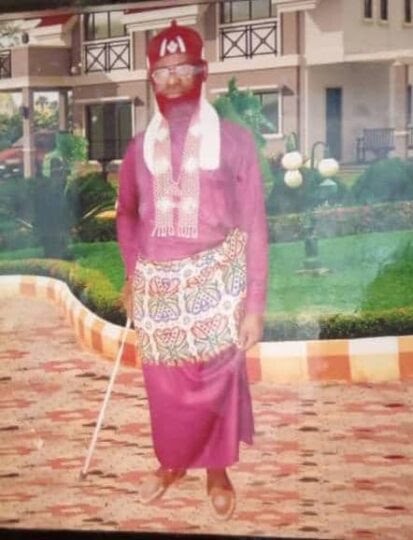 ENUGU, Nigeria (VOICE OF NAIJA)- A 19-year-old lady, Stella Ndoma, on Friday narrated how her father the traditional ruler of Orimekpang in Boki Local Government Area of Cross River, Chief Mbayin Ndoma was killed by cultists.

Stella told journalists that her father was killed after several hours siege to his home in the community.

She however, appealled to the police to bring the killers of her father to book.

The News Agency of Nigeria reports that at the time of his murder, Ndoma was the traditional ruler of Orimekpang.

The daughter alleged that her father’s killers were some youths suspected to be cultists that he sent on exile from the community.

“I am shocked when I learnt that my father who was a traditional ruler in Orimekpang community was shot dead by hoodlums.

“Not even a single person has been arrested in connection with his murder,’’ she lamented.

Narrating how her father was killed, Stella said Chief Ndoma got a phone call at 12:20a.m. from an unknown caller who asked him to leave the community immediately, claiming that some assassins were coming after him.

She said immediately her father left the house, the assassins stormed his residence and harassed his wife, demanding to know his whereabouts.

“My stepmother responded that her husband was not at home. They spent some time in our house waiting for the traditional ruler to return.

“At about 6a.m., my father emerged from the community secondary school where he hid, but the assailants dragged him back to the school,’’ she said.

She added that it was the sound of gunshots that made her stepmother to raise alarm that her husband was yet to return home after leaving following the phone call he received.

She said that youths and community vigilantes mobilised and went to the secondary school only to find the corpse of the traditional ruler there.

“His assailants left a note on the corpse with the inscription: “this is the beginning of war between the community and us. Any man who squeezes bitter leaf, his hands will be bitter,’’ she said.

She added that another note read: “anyone who intends to dare us, should wait for his turn.’’

Confirming the incident, the Police spokesperson in Cross River, SP Irene Ugbo, said investigation into the matter had started.

“Police is already liaising with leaders of the community to find a way forward on how to apprehend the killers of the traditional ruler,’’ she said.