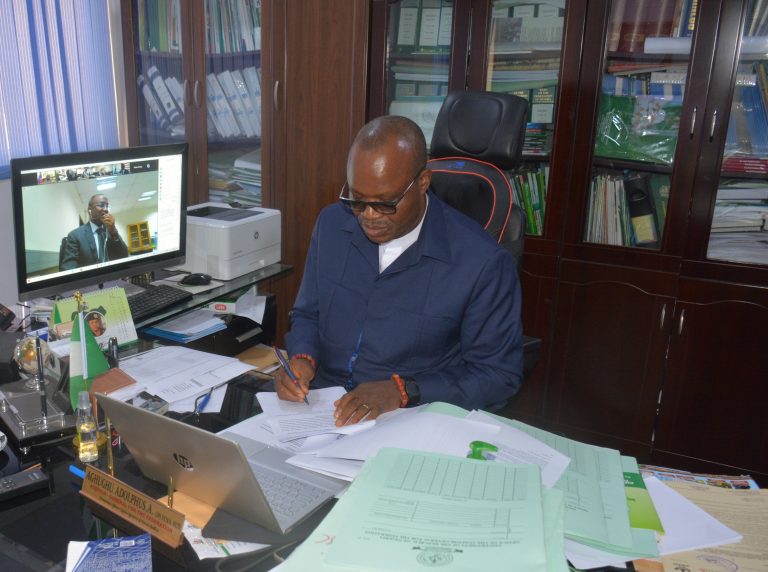 RICHMOND, Texas. (VOICE OF NAIJA) – Nigeria’s outgoing Auditor General of the Federation, Alphonsus Aghughu, has finalised plans to install one of his stooges to cover up his alleged Frauds and Maladministration, voiceofnaija.ng can report.

The embattled AuGF has about two weeks left to retire, and is expected to handover to the most senior director of audits in the office.

However, he is said to be working round the clock in order to ensure that his preferred candidate replaces him.

According to reports, AuGF Aghughu has allegedly connived with some highly placed people at the office of the Head of Service to change the rules so that his preferred candidate, who is also from the same region as he, can replace him.

The unethical maneuvering has plunged moral at the AuGF office, report say.

“The Outgoing AuGF should allow the new AuGF to come from another zone of the country, period! And he should stop the ongoing manipulation,” the source stated.

The three most senior directors in the AuGF’s office are not his from south south region (Edo) where AuGF Aghughu hails from.

However, reports say that his preferred candidate, who is number four in line of succession going by the Public service rules PSR020106, is from the south south region (Delta).

Investigations indicated that as succession battle rages on, the Head of Service was asked to determine the order of seniority among the warring directors.

But in an unprecedented move, on 18 July, 2022, another (conflicting) memo signed by the Director of Organisation Design and Development, surfaced from the office Head of Service. The listed order of seniority in the conflicting memo are as follows: Mr. Onwudili OA, Mr. Gbayan GS, Mrs. Ogundowo AO, Mrs. Ugwu NE, Mr. Isiuku JM.

“The HOS needs to explain what has changed between March and July which warrants issuing conflicting memos on this subject matter at the office of AuGF of the federation,” our source said

Report revealed that with the new memo from HOS, the AuGF’s preferred candidate has been catapulted from 4th to 1st position in what appears to look like an orchestrated plan to hand over to his anointed candidate.

Some of the Directors have protested the memo of 18 July, 2022, stating that it does not follow the civil service rules.

Our reporter spoke with serving and retired civil servants and they all agreed that determination of seniority is by date of entry/assumption of office.

Reacting to the issue in a recent statement issued by the press office of the AuGF, the head of the media, said the controversial memo of the 18 July, 2020, which gives Mr. Onwudili OA – preferred candidate of the AuGF – the most senior role, has put the matter of seniority to rest.

However, our findings show that the matter is far from over as there are barrages of protests and petitions against this controversial memo, which the statement fails to acknowledge.

“For instance, the memo failed to ascribe it’s decision to any known civil service rule. Such a weighty decision can not be predicated on conjecture, it certainly can’t be discretional since there are existing rules and precedence.

“This manipulative move to install a successor through the back door has to stop, it is capable of eroding the integrity of the AuGF office, causing disharmony as well as setting a bad precedent in the service.

“If you have served very well devoid of fraud and corruption — which you want a stooge to cover up – do the right thing, handover to the right person.” our source stated.

Adolphus Aghughu Auditor General of the Federation Head of Service