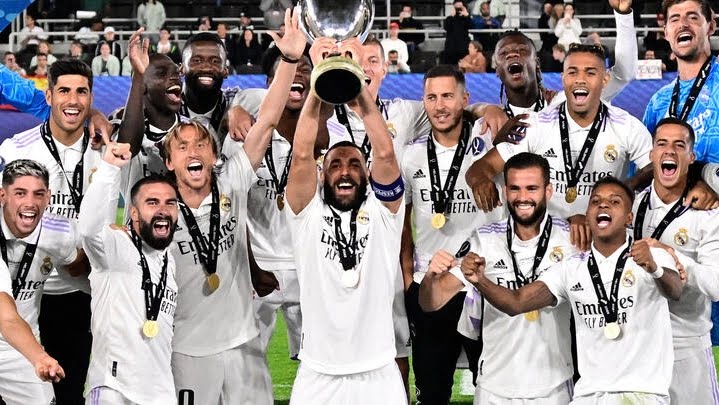 A first-half goal from David Alaba and another from Karim Benzema in the 65th minute wrapped up the title for the Spanish team.

Europa League winners Eintracht had offered some resistance in the first half and had chances to score but were eventually overrun by the Spaniards.

Madrid’s quality became more obvious in the second half, with Trapp saving a deflected Vinicius shot in the 54th minute and Casemiro hitting the crossbar with 61 minutes gone.

Vinicius skated down the left before slicing the ball back seemingly unsighted for the Frenchman to hammer home from the edge of the box.

Frankfurt fought hard in the closing stages, but Madrid were able to dominate the game to win their fifth Super Cup from eight attempts.

The clash, in Helsinki’s Olympic Stadium, was the first time these two sides had met in a European decider since 1960, when Madrid dismantled Frankfurt 7-3 through four goals to Ferenc Puskas and three to Alfredo di Stefano in the European Cup final.

Real drew level with AC Milan and Barcelona with their fifth victory in the European season curtain-raiser in the Finnish capital.

Real’s Carlo Ancelotti became the most decorated coach in the event with now four titles, one more than Pep Guardiola, and also moved one ahead of the Spaniard with now five titles as coach and player.

“We had difficulties at the beginning. But we didn’t lose patience and were in control after the first goal,” Ancelotti told streaming portal DAZN.

“We have a lot of confidence. We weren’t spectacular but solid. We can find the right opportunities to be efficient up front.”

Only city rivals Atletico Madrid have won the Super Cup when qualifying via a Europa League win in the past decade, having done so by beating Real in the 2018 edition.

In the 10 years before, Champions League and Europa League participants won five Super Cups each.