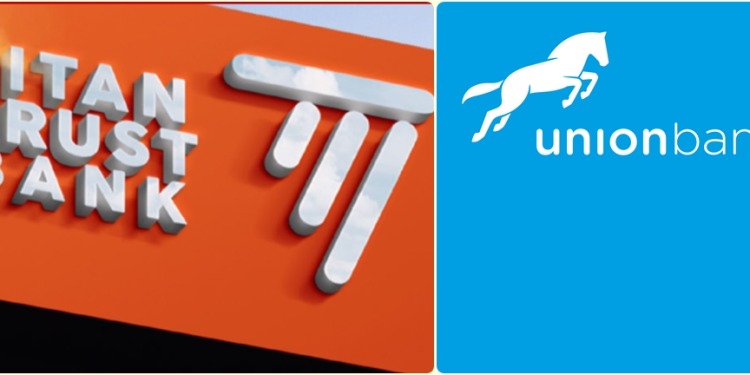 RICHMOND, Texas (VOICE OF NAIJA) – The recent sale of Union Bank Nigeria Plc, one of the oldest banks in Nigeria, is full of irregularities, fresh investigations have revealed.

A peep into the profile of Titan Trust Bank, the new owner of the bank, revealed that this unknown bank may have allegedly been fronts for the CBN governor, Godwin Emefiele and his friends.

A source familiar with the negotiation of the purchase of union bank, who spoke to voiceofnaija.ng on condition of anonymity, recounted how the deal was struck, claiming that Union Bank was purchased by powerful people as Titan Trust Bank was just used as fronts.

“Titan Trust Bank was founded in December 2018, and their operations fully started in 2019 after obtaining their license. Where did they raise capital to purchase Union Bank? Most Nigerians don’t even know of a bank called Titan Trust,” the source said.

Atlas Mara, who owns 49.97 percent ownership of the Union Bank, was said to have recently received offers from local banks wishing to buy over Union Bank.

Bloomberg had reported that the financial services holding company was contemplating its future with the Lagos-based lender, and had received acquisition offers from domestic bidders.

Atlas Mara is based in the British Virgin Islands and was founded in 2013. The company’s share of Union Bank, which has a market value of N161.620 billion, is its largest asset before it was sold to Titan Trust Bank.

“If you dig deeper, you will discover that Titan Trust Bank, and its mother company Tropical General Investments (TGI), are owned by powerful people in government and the CBN governor knows about this,” our impeccable source further offered.

A further investigation by our correspondent revealed that Titan Trust Bank was registered with the Corporate Affairs Commission on January 1, 2021, with 2 persons with significant control (PSC).

One owner is an entity named LUXIS International DMCC, with correspondence address as Unit no 1141, DNCC Business Centre, Level No 1, Jewellery and Gemplex 3, Dubai. The said address, based on our findings, is a Jewellery & Gemplex Building, a jewelry store in Dubai.

The two persons with significant control of the company, according to CAC records on file, do not directly or indirectly hold at least 5% of the shares or interest in the company.

They also do not directly or indirectly hold at least 5% of the voting rights in the company or limited liability partnership.

This implies that the two persons with significant control of the company have no powers over the company they registered, which suggests that they may merely be used as fronts to register Titan Trust Bank, a bank that bought one of the oldest financial institutions in Nigeria.

Our correspondent’s findings revealed that with other notable financial institutions in Nigeria, the Persons with Significant Control are the major shareholders or outright owners of the company.

Unlike Agbaje, Jim Ovia of Zenith Bank is credited to have 1129% direct and indirect shares in the company, and is registered as the only Person with Significant Control at the financial institution.

Our investigation also revealed that Tropical General Investments Limited, with correspondence address: Pasea Estate, Road Town, Tortola, British Virgin Islands, does not, according to CAC, directly or indirectly hold at least 5% of the voting rights in the company or limited liability partnership.

“I am telling you that if you dig deeper, you will be shocked at the people who own these entities. When you see an address from the British Virgin Island, you should know that just like the Cayman Islands, these people just use an address to siphon money out of the country.

“Aren’t these people ashamed that they are using a jewelry store in Dubai as an address for an entity that has bought UNION BANK of Nigeria PLC, one of Nigeria’s oldest banks? I think we need to expose these people to the whole world,” the source lamented.

Our correspondent reached out to the management of Titan Trust for their response to our findings, Tunde Lemo, the bank’s Chairman, responded to our messages seeking their side to the report.

He refuted claims that the 2 Persons with Significant Control (PSC) of the bank, as discovered by voiceofnaija.ng’s investigations, are the true owners of the bank.

“The Group has operations in so many states of the federation with footprints in other African Countries. The companies in Nigeria have workforce of over 10,000 with indirect employment to hundreds of thousands of outgrowers etc.

Probing further, our correspondent sought more clarity on how much stakes the two PSC (registered by the CAC) have in Titan Trust, again, Tunde denied the claims they are linked to the bank in any way.

He said: “I don’t know about the address in Dubai but the two owners are: Mr Vink and Mr Savara. They are highly distinguished international businessmen with impressive track record.”

Our correspondent will continue to dig deep to find out the truth about the details of the purchase of one of Nigeria’s oldest financial institutions and why the purchaser address is a jewelry store in Dubai, U.A E.

What Sammie Okposo Discussed With Me Before He Died – Apostle Suleman