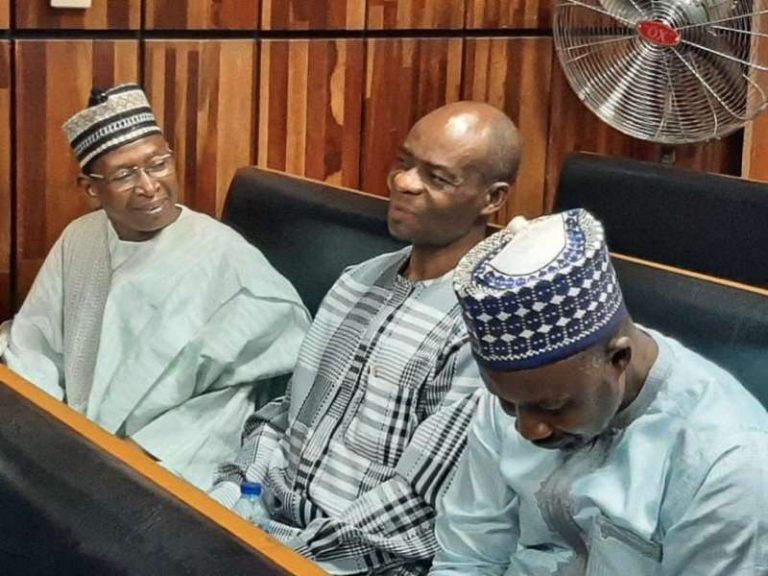 IBADAN, Nigeria (VOICE OF NAIJA)- A High Court of the Federal Capital Territory, FCT, sitting at Maitama, revoked the bail granted to Mohammed Usman, who is the 3rd Defendant in the 14-count money laundering charge preferred against the former Accountant-General of the Federation, AGF, Ahmed Idris.

EFCC alleged that Usman who was the Director of the Federation Account, and one Godfrey Olusegun Akindele, in connivance with the erstwhile AGF, diverted public funds to the tune of about ₦109.4 billion, using the account of a company, Gezawa Commodity Market & Exchange Limited, which is the 3rd defendant in the matter.

At the resumed proceedings on Tuesday, trial Justice Adeyemi Ajayi revoked the 3rd defendant’s bail following his failure to arrive at the court room on time.

Usman, who was absent when the trial Judge entered the courtroom around 9:20am, notified the courtbthough his lawyer, Ibrahim Ishaku, SAN, that he was held up in a gridlock.

Dissatisfied with the excuse, Justice Ajayi revoked the Defendant’s bail and ordered hís remand at the Kuje prison.

It will be recalled that the court had on July 28, granted the former AGF bail in the sum of ₦5 billion with two sureties which it stressed must be a Director and a Permanent Secretary.

The court equally granted the 2nd and 3rd defendants bail in the sum of N2bn each with two sureties who must be Directors.

Justice Ajayi said she was inclined to adopt all the terms and conditions of the administrative bail the EFCC previously gave to the defendants.

As part of conditions, the defendants were barred from travelling out of Abuja, even as they were ordered to surrender their international passports and undertake not to procure alternate passports during the pendency of the case.

The defendants were equally ordered to depose to an affidavit of assurance to abide by all their bail conditions.

The first prosecution witness, PW-1, Mr. Hayatudeen Ahmed had in his testimony before the court, narrated how the defendants allegedly pilfered about N84.7billion out of $2.2 billion that was meant for nine oil producing states.

The witness, who is an investigative officer, said the ex-AGF was arrested, following the outcome of an investigation into a petition that was lodged against him by the Federal Treasury Concerned Staff Association.

He told the court that investigation revealed that the defendants had after the Federal Account Allocation Committee, FAAC, approved $2.2 billion for the nine oil producing states, surreptitiously diverted N84.7bn out of it under the guise that it was for the settlement of consultants.

He told the court that a company that was floated by the 2nd defendant, Akindele, who was a technical assistant to the former AGF, was approved as the sole consultant for the deal.

According to the witness, the defendants, sequentially withdrew funds from the Escrow account of FAAC and shared among themselves and other persons that included a former governor of Zamfara State, Abdulaziz Yari and a former deputy governor of Abia state, Chuks Akomas.

He told the court that his team of investigators uncovered that the former AGF used his own share of the loot to purchase properties like the Gezawa Commodity & Exchange Market Ltd, Gezawa Integrated Farms Ltd and Kano City Mall, some of which he said were acquired in the name of his family members.

Led in evidence by EFCC lawyer, Mr. Rotimi Jacobs, SAN, the PW-1, said his team had in the course of the investigation, interrogated several persons, including a Kano-based Bureau-de-Change, BDC, operator, Beta. I. Kurah, who he said admitted that he received over N1.3bn from the former AGF, all in cash and in US dollars.

He said the BDC operator equally revealed that he made several payments, including the sum of N208m, into the account of Gezawa Commodity & Exchange Market Ltd, in Jaiz bank.