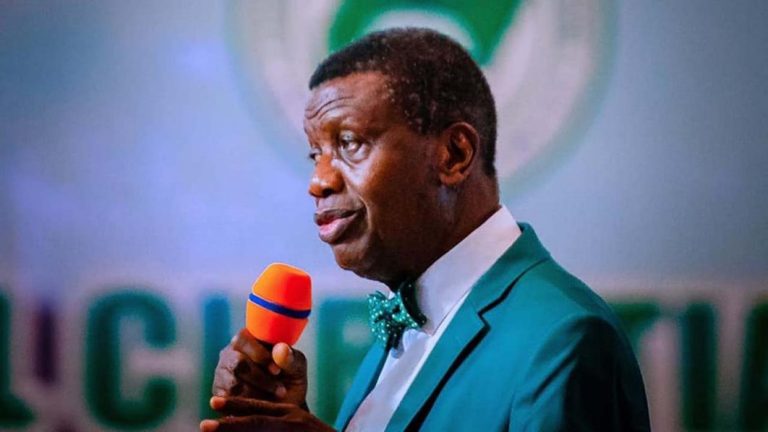 IBADAN, Nigeria (VOICE OF NAIJA)- The General Overseer of the Redeemed Christian Church of God, Pastor Enoch Adejare Adeboye, has announced the retirement of some ministers who are above 70 years.

It was gathered that a formal announcement was made at the end of the Church’s Ministers’ Conference on Sunday, and full list of their replacements would be made by the administration department of the church.

Among the changes are the retirement of the Church’s National Overseer, Pastor Joseph Obayemi and other pastors who are over 70 years old.

Pastor Adeboye explained that the retirement age for all RCCG pastors would now be pegged at 70 years, but some of those on retirement could be given lesser roles.

A source said the General Overseer is under “clear instruction (from God)” to inject younger persons into the leadership of the church.

Pastor Sunday Akande is to replace Obayemi as the RCCG National Overseer, while Pastor Kalu Ndukwe will serve as the Overseer of the Africa Continent.

The position of national overseer of the church will now be on a two-year tenure basis, while the pastor occupying the position will operate from the redemption camp.

All churches in the camp would henceforth report to Akande, who will also represent Pastor Adeboye on special assignments.

Also affected by the changes is Pastor Johnson Odesola, who was in charge of Administration and Personnel of the Church.

His twin portfolios will now be taken over by Julius Olalekan to be in charge of Personnel, while Pastor Dele Balogun takes charge of Administration.

An elder of the church, which brims with top professionals and academics, described Dele Balogun and Julius Olalekan as “vibrant and dynamic pastors both born in 1968. Pastor Balogun, for example, was a professor at Olabisi Onabanjo University, who has dropped his academic titles to serve the Lord.”

Pastor Adeboye reiterated that although God has not revealed the next General Overseer to him, he has the confirmation that he would be a young person.

As part of the changes, he also said the Redemption Camp will henceforth carry the tag of a city, just like the Vatican City; and the ring road in the Camp was named after the founder of the church, Pastor Josiah Akindayomi. Some other roads were named after some retired pastors of the church.

The City, promised Pastor Adeboye, when as the General Overseer in the early 1980s, he was living in a one-room apartment in Mushin, a suburb of Lagos because of the weak financial position of the church, is one of the miracles of the church, which continues to spread worldwide, even to countries like Libya.

Pastor Adeboye had left his job as a university lecturer living in a large 7-bedroom house, to be the General Overseer.

On the first day of the 2022 National Convention of the church, Pastor Adeboye spoke passionately to house-fellowship leaders and workers of the church about the joy of being in the presence of God at the plenary session during the night.

He cited the example of King David, who spoke often about the joy of being in God’s presence. For example, David said, “ I was glad when they told me to let us go into the House of the Lord.”

“David, who desired to live in the house of the Lord for the rest of his life, knew with that Goodness and Mercy would follow him all the days of his life.

“But because we all cannot relocate to the House of the Lord, there is wisdom in creating conditions for God’s presence in our homes.

“The presence of the Ark of the Lord in the house of a stranger, Obededom, changed his fortunes so dramatically in 3 months that David rushed to take it with energetic dancing, now known as David’s dance.”

He said, Jubilee, which is the theme of the Convention, means restoration, a new beginning. And David danced and rejoiced greatly because he got his jubilee restored to him.

“When you open up your house for God, He will be near to you,” he said.

The day was full of activities, including the colourful graduation ceremony of the Redeemed Christian Bible College (RCBC). Among them was an octogenarian, Ojie Mabel Iwegbundu, who bagged a Post Graduate Diploma in Theology.

An excited Pastor Adeboye, himself 80, tweeted about her later

“In the 42 years of existence of RCBC, we had the oldest graduating student ever in attendance.

“She is an 87-year-old grandmother who was admitted and completed her studies leading to the award of Postgraduate Diploma in Theology today from Faith Campus Zone, Ejigbo, Lagos State. It is such a wonderful delight that RCBC programmes have a broad-spectrum appeal to diverse age groups.”