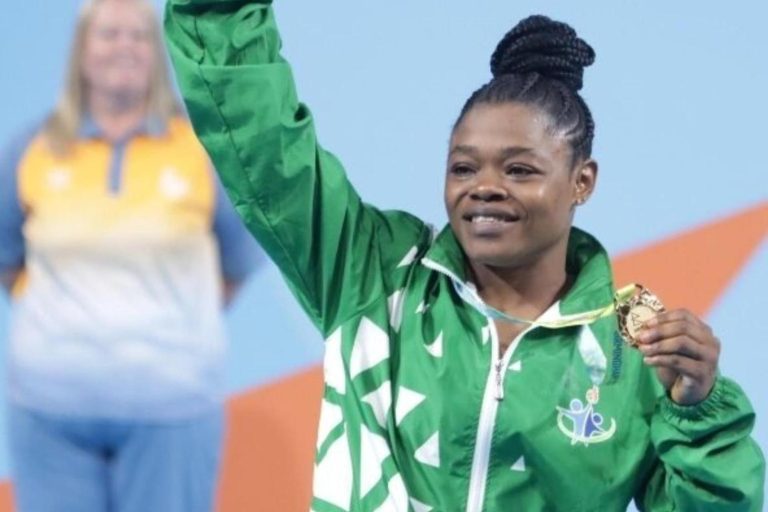 Ibadan, Nigeria (VOICE OF NAIJA) – Team Nigeria continued their upward move to a respectable position on the Commonwealth Games Medals table after claiming a second gold medal on Sunday.

The Nigerian, in the process, set three Commonwealth Games records in the women’s 59kg final, lifting 90kg in snatch, 116kg in clean and jerk, and 206kg in total.

Jessica Brown of England emerged second in the event with 197kg in total to win the silver medal, while Canada’s Tali Darsigny won the bronze medal with a 196kg lift.

Team Nigeria have now won two gold and one bronze medals and are currently placed ninth on the medals table.

All the three medals have come from the weightlifting event where the Nigerian lifters are not only winning medals but doing so in record-breaking fashion.

Lawal was the second Nigerian to win a medal after Edidiong Umoafia won bronze in men’s weightlifting.

Speaking on her dominant performance in Birmingham, Lawal said it was a product of the hard work she put into her preparation.

She said: “I’m so excited and happy because I didn’t expect what happened on Sunday. I wasn’t under any pressure because of the support my English opponent received from the home fans. I’ve trained very hard and my target coming here was to get the gold medal.”

Team Nigeria’s quest for more medals in Birmingham will continue on Monday with the country expected to feature in Judo where Edwin Patrick will fight against Nathan Burns.

Also on Monday, Team Nigeria boxer, Innocent Ehwarieme will be in action in the Men’s Light Heavyweight (75kg-80kg).