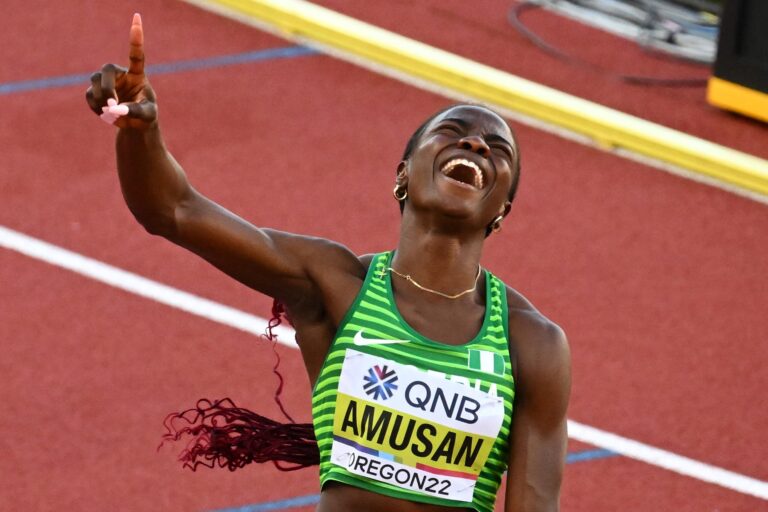 Labour Party’s presidential candidate, Peter Obi, on Monday, joined other Nigerians to celebrate Tobi Amusan over her victory at the World Athletic Championship.

Tobi Amusan became the first Nigerian athlete to win a World Athletics Championship gold as she stormed to victory in the women’s 100m hurdles in Oregon, USA, on Sunday.

Amusan, who had obliterated the world record in an astonishing semi-final where she clocked 12.12sec, powered over the line at Hayward Field in 12.06sec.

Her winning time will not be recognised as a world record, however, due to a strong following win of 2.5 metres per second but didn’t stop Nigerians from celebrating one of their own.

He wrote: “I sincerely congratulate Tobi Amusan on winning the 100M hurdles gold medal and setting a world record. Her tears at the ceremony podium while the Nigerian anthem played, connects that our dear country needs leaders to match the talents and ambitions of her youths.-PO”

He continued, “Like u said, Nigeria “needs leaders” & u don’t have to become the president first before standing up for what’s right; So use ur influence to rescue the abducted passengers before something tragic happens.”

A tweep, Ibrahim said: “Why would he care?

Anyways, he will be shocked when he becomes the President of SE and SS alone come 2023.”

Manger Ajake: “I’m glad we have moved the conversation from he cannot get up to 1m votes and he cannot win more than 1 state to he will be President of SS and SE. Don’t worry You will add SW and NC before next month.”

Dr Felele: “It actually moved from
“He has no structure and elections are not online”..
Twitter president…bla bla…
Now he is wining SE and SS??? Wooow!”

Olympique Marcel: “You have a commander in chief of the armed forces, DSS, immigration, customs, civil defense, NIA, DMI in Aso Rock and you frustration is on a presidential candidate.

What is wrong with the way some of us reason?”

Jude: “The attention seeking Daniel, should look at these class of 2015-2023 FAILURES and mandate them to rescue the victims! Their principal Buhari and headmaster Tinubu, standing far right, should do the needful first,, then Obi can do the rest!”

Yasuke D African Samurai: “After reading through the post and comments I actually came to a conclusion that @DanielRegha is just using such posts to gain engagement and once it becomes clear to everyone that, that is what He is doing He’ll loose every engagement He has been getting.

“Because I really don’t think drawing an inappropriate image tarnishing attention using such opinion towards someone who doesn’t have the authority in His hand is proper. Except if You are saying use His influence by approaching international assistance to rescue them.”