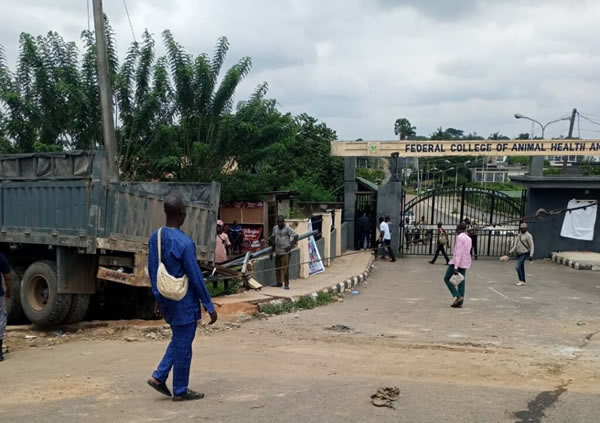 A truck loaded with bags of rice, on Monday, crashed into the premises of Federal College of Animal Health and Production Technology in Apata, Ibadan, after losing control.

A part of the fence and shops in the school premises were destroyed by the truck.

When TheCable visited the scene of the accident, officers of the Oyo/Osun area command of the Nigeria Customs Service (NCS) were seen evacuating the rice.

When contacted about the development, Kayode Wey, the public relations officer of the Oyo/Osun area command of the NCS, said the officers were contacted after the accident had happened.

He said the command would determine if the rice on the truck is foreign or local before taking the next step.

“I have contacted our operations and they said they were called to the scene on intelligence that an accident happened and it involved a truck carrying customs items. I was not told who gave the information,” he said.

“We don’t know where it is going or coming from until investigation is completed.

“We were not there when the accident happened. It is also too early to know if the rice is foreign or Nigerian brand.”

One of the owners of the affected shops, who identified himself as Abbey, said he slept in his shop when the truck ran into the school fence.

He said the driver and two other occupants in the truck sustained injuries.

“I worked late on Sunday and decided to sleep in the shop. Around 2am on Monday, I heard a loud bang and woke suddenly. I ran out of the shop and made a lucky escape,” he said.

“The truck crashed into the shops, including my own, and destroyed everything inside. Some people who were in the staff quarters of the school rushed out and we rescued the occupants. The driver could not move but he was alive. The two others had big cuts on their legs.

“From the conversation we heard from them, it was obvious that one of the occupants is a representative of the owner of the goods. He said they were coming from Ogun state when the driver suddenly climbed speed breakers installed in front of the school.

“He accused the driver of consuming alcohol. Apparently, after climbing the bumps at high speed, he lost control of the truck and ran into the school fence.”

Abbey said there was a quarrel between the two passengers in the truck, before they became weak from the effect of their injuries, adding that they were later taken to a hospital in the area.

Adewale Osifeso, the public relations officer of the Oyo state police command, could not be reached for a comment but a policeman at the scene of the accident, who spoke on condition of anonymity, said strange behaviour of the truck occupants raised suspicion that they could be carrying contraband goods.

“The normal thing when there is an accident of such magnitude is to report to a nearby police station. A police station is less that 300 metres from the scene, but instead of reporting to us, they were making arrangement to move the goods away,” the officer said.

“Our men heard a loud bang and came to the scene. I think one of our senior officers contacted the customs office over the movement of possible contraband goods into the state.”