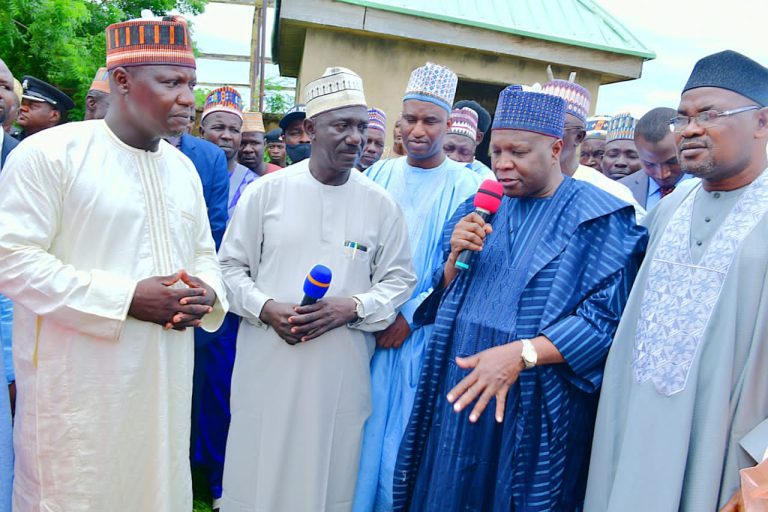 GOMBE, Nigeria (VOICE OF NAIJA) – Gombe State Governor, Muhammadu Inuwa Yahaya says inspite of paucity of funds in the midst of competing demands, his administration will continue to give priority attention to sundry issues affecting the Education sector at all levels.

The Governor gave this indication when he visited the College of Education and Legal Studies, Nafada to assess the level of infrastructural challenges confronting the School.

While inspecting the female hostel that was under construction but abandoned since 2018, the governor assured that his administration will soon award contract for the completion of the project, pending the construction of a befitting permanent site.

“The facility inspection visit we embarked upon will help us as a government to be able to assess what is on ground and the rot in our Schools with a view to taking measures against compromising standard while developing a permanent site”.

The Governor explained that he is more favourably disposed to having the College relocated from its current location to a more suitable site, saying: “the Education environment or any other Government establishment needs a permanent site to be able to erect structures that can stand the taste of time unlike the substandard structure now in place.”

The Governor therefore hinted that his administration through the relevant Ministries and Agencies will identify a suitable land for use as permanent site for the College.

Governor Inuwa Yahaya further challenged the Management of the institution not to relent in their determination to make the School a centre of academic excellence and a springboard of professionalism.

Governor Inuwa Yahaya lauded the Management of the College for their steadfastness towards the change of the School’s nomenclature and approvals by the National Commission for the Colleges of Education (NCCE) as well as the Tertiary Education Trust Fund (TETfund).

“Whatever conditions these bodies gave we were able to meet. It did not just happen like that, it happened because there was an effective follow up from so many angles; and we shall consistently do that so that our aim will be achieved and our purpose of setting up this college will be achieved.”

The Commissioner for Higher Education, Mr. Meshack Audu Lauco had expressed confidence that the visit by Governor Inuwa Yahaya will herald the much needed infrastructural development in the institution.

Earlier speaking, the Provost of the College of Education and Legal Studies Nafada, Dr. Safiyanu Ishaku said through the support and encouragement of Governor Inuwa Yahaya and the Gombe State House of Assembly, the law establishing the institution was repealed to change its nomenclature.

He revealed that the National Commission for Colleges of Education (NCCE) has given the institution provisional approval for the commencement of various NCE programmes.

“Joint Admissions and Matriculation Board, JAMB equally invited us to have a one-on- one discussion, we showed them the provisional approval, we showed them the commitment of the Governor and within two to three weeks the name of the College appeared on JAMB website.”

He said through the instrument of the Governor, the College applied and got enlisted into the Tertiary Education Trust Fund (TETfund) for its intervention programme.

The provost further intimated the Governor that the North East Development Commission NEDC has indicated willingness to intervene towards the infrastructural development of the College.

On some of the challenges confronting the institution, the provost appealed to the Governor for the completion of its female hostel and the provision of utility vehicles among other needs.

The Governor later took a facility tour of the College to better appreciate the challenges confronting the institution established since 2013.