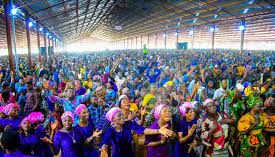 The spokesperson for the command, SP Benjamin Hundeyin, disclosed this on Friday.

He explained that the incident occurred at about 11:00 a.m. on Thursday at the church, located on 13/15, Ewenla Street, Pab Bus stop, Ikotun, Lagos.

“The police received a report that there was a stampede during their congregational service at the church on Thursday. As a result of the stampede, five persons slumped and were rushed to Isolo General Hospital for treatment,” the police stated.

The spokesman added, “A woman of about 45 years old and a five-year-old girl, whose identities and address are unknown, died. The scene has been visited, corpses deposited at Mainland General Hospital mortuary, Yaba, for preservation, investigation in progress.”