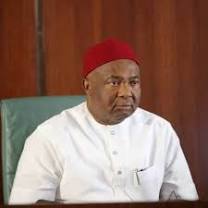 ENUGU, Nigeria (VOICE OF NAIJA)- The proscribed Indigenous People of Biafra (IPOB), has said Governor Hope Uzodinma of Imo State did not stop the sit-at-home order in the state.

According to IPOB, Governor Uzodinma could not stop the sit-at-home order because he never initiated it.

This was contained in a statement by Emma Powerful, the spokesperson of IPOB.

Powerful said the group cancelled the sit-at-home order on the advice of its leader, Nnamdi Kanu.

Powerful in the statement urged Nigerians to ignore Uzodinma’s remark that he stopped the sit-at-home order in the state.

According to Powerful: “Following the cancellation of the Monday sit-at-home order by IPOB since last year, we the global movement and family of the Indigenous People of Biafra (IPOB) ably led by Mazi Nnamdi Kanu wish to remind Imo State Administrator, Hope Uzodinma, that he did not stop Monday sit-at-home in Imo State but our leader through IPOB leadership did.

“IPOB wishes to remind Hope Uzodinma that he does not have the capacity to stop any Sit-at-Home order initiated by IPOB. Yes, IPOB started the infamous Monday sit at home last year but subsequently cancelled it as advised by our leader, Mazi Nnamdi Kanu, due to appeals from the elders and traditional rulers in our territory.

“Hope Uzodinma coming out to say that he stopped IPOB’s sit-at-home order in Imo State shows that he is not properly informed. IPOB cannot give order and Hope Uzodinma will stop it because everybody knows that the Supreme Court Governor in Imo State represents the interest of our enemies. IPOB is an iroko tree planted by CHUKWUOKIKEABIAMA and nobody can bring it down.

“We, the Indigenous People of Biafra, IPOB, led by Mazi Nnamdi KANU, is not responsible for any non-existent Monday sit-at-home that Hope Uzodinma is claiming and yabbying about. As long as IPOB is concerned, our people are free to go about their businesses on Mondays without molestations. Our people love and respect IPOB orders when called upon because they fully appreciate our struggle for their well-being and that of their Children.

“We are laughing at Hope Uzodinma for saying he stopped IPOB sit-at-home in Imo. Hopeless does not have the wherewithal to do so. Uzodinma should know that IPOB is not looking at his face before we do anything.

“Our people are the IPOB, and IPOB are our people. We understand ourselves, and we roll together any time any day.”