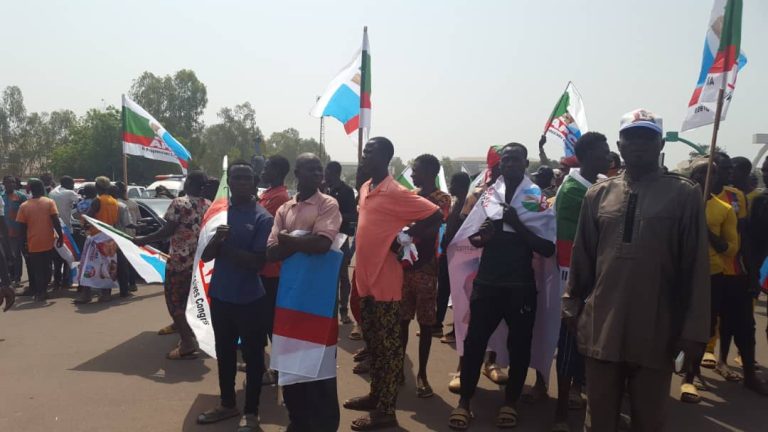 Enugu, Nigeria (VOICE OF NAIJA) – The presidential mega rally of the All Progressives Congress (APC) in Enugu State, on Wednesday, was greeted with a low turn out.

Voiceofnaija.ng gathered that the supporters of the presidential candidate of the party, Bola Ahmed Tinubu, at the Okpara Square, were there simply because of the money they were being promised.

One of the supporters who pleaded anonymity told our correspondent that his right choice of candidate is in his heart but had to be at the presidential rally for the money he would get.

According to him: “I came from Nkanu West, Enugu State for the presidential campaign of Bola Tinubu.

“Asking me if I want to vote for Tinubu is not important. See, the person I want to vote is in my mind. It does not mean I will tell you who I will vote for.

“I am just here for the campaign purposes and money involved and also to see what is happening. at the rally ground”

Also, one of the supporters at the venue of the rally, told our reporter that they came from Ishiagu, in Ebonyi State for the rally.

He emphatically told voiceofnaija.ng that he will not vote Tinubu during the presidential election, but Peter Obi of the Labour Party, (LP).

The man who wouldn’t give his name for security reasons, explained that Obi, a former Anambra State Governor, is the candidate that can give him what he wants if he becomes the President.

He said: “I will not vote Tinubu for president. My choice of candidate is Peter Obi. And I keep telling everyone around me to vote for Peter Obi. But at the state levels, I can vote the APC.

Another man who would not like his name mentioned, also said he joined his people from the village and afterwards, they will pay them.

“Let me just show them the broom I have here, but on the election day, I will vote the candidate I have in my mind,” he told voiceofnaija.ng.

Furthermore, a youth who came from Eha Amufu, a town in Enugu State, stated that he came to collect his money.

“I will vote for the right person but I am here to collect my money,” he said astutely.