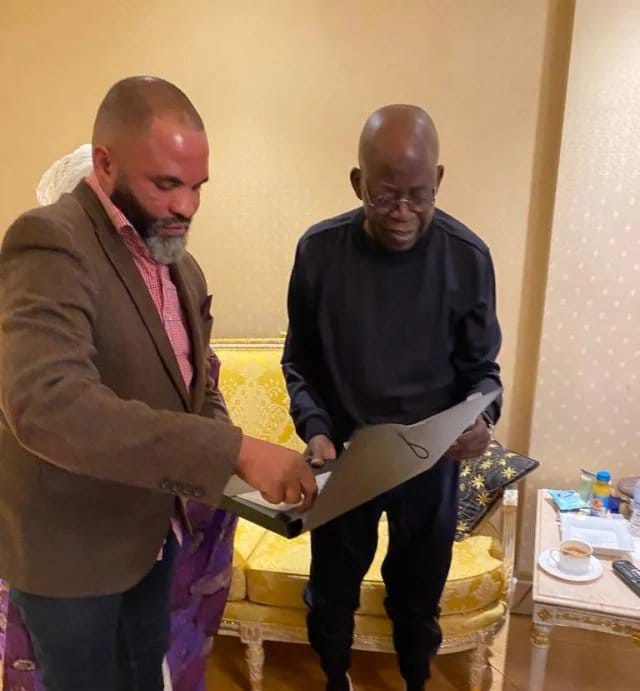 IBADAN, Nigeria (VOICE OF NAIJA) – Nigerian investigative journalist, David Hundeyin, has called out the All Progressives Congress (APC) candidate, Bola Ahmed Tinubu, over the video he shared on his Twitter page on Sunday night, 2 October, 2022.

Hundeyin shared two photos of the APC chieftain donning the same outfit in January, 2022 and October, 2022.

The journalist also pointed out that the pictures were not taken in the United Kingdom but in Nigeria.

He said if Tinubu’s people are going to tell lies, “they shouldn’t insult our intelligence.”

In his own words: “Living spaces in British houses are almost never constructed with ceramic floor tiles because those tiles are terrible for retaining heat. The floor finishing is always wood, laminate or carpet.

“If Tinubu’s people are going to tell lies, they shouldn’t insult our intelligence.”

Recall that Tinubu shared a video of himself working out on a fitness bike to prove that he’s strong and healthy and to dismiss rumours that he is dead.

The former governor of Lagos State, in a tweet, also dismissed claims that he had withdrawn from the 2023 presidential race.

He wrote: “Many have said I have died; others claim I have withdrawn from the presidential campaign. Well… Nope.

“This is the reality: I am strong, I am healthy and I am READY to serve Nigerians from Day One.”

Concerns had been raised about Tinubu’s whereabouts after he failed to turn up for the peace accord signed by presidential candidates in the coming 2023 election.

He was, however, represented at the event by his running mate and former Governor of Borno State, Kashim Shettima.

Reacting to Hundeyin’s criticism of the video released last night, a tweep Conssor X said: “Plus almost very difficult to see sockets like that in UK and did you notice the shit Amoda was riding isn’t even plugged… They still think we are generations from our parents’ era 😩😩😭😭😭 “

Timothy Oluseye Adegunle also said that “That he is in Nigeria means he didn’t even go to the UK for medicals like most of you are claiming.”

Another tweep, ExpressionXs said: “See the socket at the extreme in the second picture..
Nothing like what is obtainable in Europe… All lies have expiry date soonest the lid will soon be blown open..”

According to @peterobi4eva: “They added Asake’s music so we wouldn’t hear the Gen sound. 😑”

Jennifer Nnenna, on her part, stated that: “Agbado and useless APC in the mud🤮 Like how low can they go to prove rubbish. Anyway we are waiting for him to comeback and campaign”

Cornerstone shared a photo of Festus Keyamo (SAN) and wrote: “They are all for the lies! APC can’t just stop being deceitful. Was it not yesterday that Mr. Mugu, Festus keyamo posted Yahaya Bello’s 2019 video and claimed it was Sunday’s rally for Tinubu?