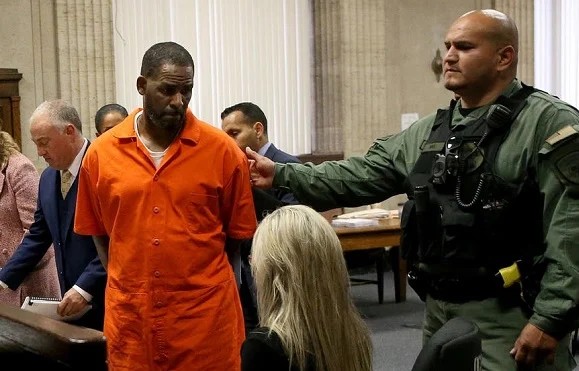 According to Chicago Suntimes, a witness who is now 37 and used the pseudonym “Jane” has testified that R. Kelly had sex with her “hundreds of times” before she turned 18.

In court on Thursday, she said the improper contact with Kelly began when she was 13.

Early in the video, Kelly can allegedly be seen handing dollar bills to Jane. Asked why during her testimony Thursday, Jane paused for a long time before answering.

“If anybody saw the tape or if it was released for some reason, he wanted it to appear as if I was a prostitute,” she said.

When she learned the tape might become public in late 2001 or early 2002 — when she was 17 — Jane said she “was extremely scared.” Prosecutors say Kelly sent Jane and her parents on a trip to the Bahamas and Cancun for several weeks as investigators looked into the allegations.

Jane later lied to a Cook County grand jury and denied she appeared on the tape, the feds say. During her testimony on Thursday, she said, “I was ashamed.”

However, she also said she viewed her secret encounters with Kelly as “something I would take to my grave.”

Jane said she met Kelly when she was 12 or 13, when the singer attended a gospel concert at her church. They were introduced by her aunt, Stephanie “Sparkle” Edwards. Jane, herself a budding R&B singer who fronted a band made up of her cousins, was thrilled to meet Kelly, who at the time was nearing the peak of his stardom.

Soon after, Kelly attended a performance of her group and gave her a glowing critique.

One day, during a session at Kelly’s recording studio, Jane followed her aunt’s advice and asked Kelly to become her “godfather.” Jane said she sat on Kelly’s lap, rubbed his head and “asked him if he’d play that role in my life.” She said Kelly “looked up at me, chuckled a little bit, and he said ‘yes.’”

Jane said her parents “thought it was cool.”

In the weeks that followed, she said her parents and aunt supervised her time with Kelly less and less, while her conversations with Kelly turned sexual. She said that soon turned to phone sex. Then, once in the “wee hours” at Kelly’s studio, Kelly allegedly groped her on a couch.

The abuse turned to sexual intercourse when she was 15, Jane testified. Asked by Assistant U.S. Attorney Jeannice Appenteng how many times the abuse occurred, Jane said softly, “innumerable times … like, uncountable.”

Kelly would allegedly “crush” on Jane’s friends — who were around her age — and asked Jane to solicit them to join in group sex.

Jane also explained she saw Kelly as an “authoritative figure” and “somebody I looked up to.”

She said she began consuming “a lot” of alcohol when the abuse began. She said it “took me away from the moment.”

In a highly anticipated testimony that lasted roughly four hours, Jane confirmed for the first time publicly that she appeared on the tape at the center of Kelly’s 2008 child pornography trial.

During the 2008 trial, Jane had declined to testify, and jurors found Kelly not guilty.

A videotape allegedly depicting Kelly abusing Jane was sent anonymously to the Chicago Sun-Times in February 2002.

The newspaper turned it over to police, and it became the centerpiece of Kelly’s 2008 trial.

According to reports, when R&B superstar R. Kelly learned that a damning video allegedly depicting him performing sex acts on an underage girl was about to go public early in 2002, Kelly met with the girl and her parents at an Oak Park hotel and apparently confessed, jurors heard on Thursday.

By the time the meeting ended, Kelly had dropped to his knees, grabbed his head and apologized for sexually abusing the teenage girl, the jury was told.

He allegedly begged for her father’s forgiveness and trailed the family as they made their way to an elevator to leave.

Federal prosecutors now say Kelly cheated his way to an acquittal in part by intimidating the woman and her family into denying the abuse.

In fact, she testified on Thursday that her parents ultimately sided with Kelly, despite her father’s comments to the singer. They couldn’t afford lawyers and “didn’t want to lose me,” she said.

In all, she confirmed that three videos at issue in Kelly’s current trial depict Kelly sexually abusing her when she was 14 and Kelly was in his 30s.

When asked why she finally decided to speak truthfully to law enforcement, she said, “I became exhausted with living with his lies.”

During her testimony, Jane and Kelly largely seemed to avoid each other’s gaze.

However, a prosecutor asked her to identify Kelly in the courtroom. She looked in his direction and identified him as a man wearing a navy blue blazer.

When asked to give more detail, Bonjean interrupted and agreed Jane had identified the singer.

“The defendant, Robert Kelly, had sex with multiple children,” Assistant U.S. Attorney Jason Julien said. “He made videotapes of himself having sex with children. And these two defendants, Derrel McDavid and Milton Brown, knew about it.”

Bonjean noted in her opening statement that Jane and her family had for more than two decades denied the singer had done anything inappropriate with her. Bonjean also alleged that several other prosecution witnesses had tried to blackmail Kelly.

Prosecutors waited decades “to bring this case in a mob justice climate where hashtag movements tell us what we should and should not believe,” Bonjean said.

Jurors have not yet seen the videos, but prosecutors have warned that they will.

Jennifer Bonjean, Kelly’s defense attorney, is expected to cross-examine Jane when the trial resumes on Friday.