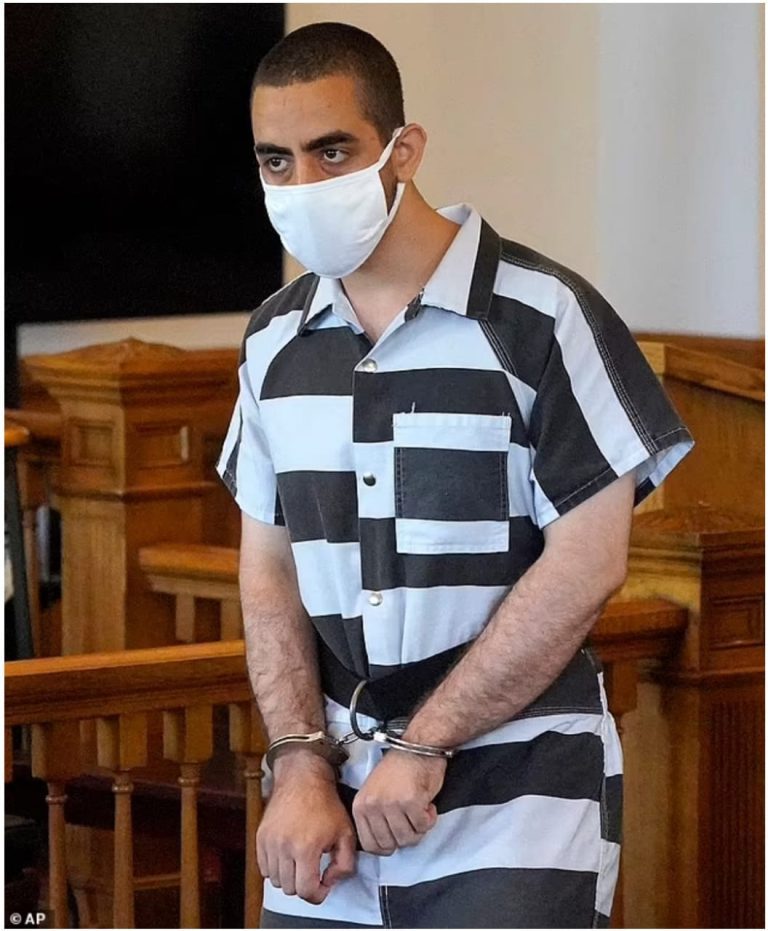 Silvana Fardos, the mother of 24-year-old Hadi Matar who attacked Salman Rushdie, revealed how her outgoing, American-raised son changed after after his trip to Lebanon to see his father in 2018.

Fardos made this disclosure in an interview with Daily Mail after the alleged Iranian sympathizer was taken into custody for stabbing the author of ‘The Satanic Verses’ at a literary event in New York.

Rushdie was airlifted to hospital and placed on a ventilator but has since recovered enough to speak and remains his ‘feisty and defiant’ self, his son Zafar announced.

Matar never had a job, never had a girlfriend but did join a local boxing gym three months ago – before abruptly cancelling his membership last week.

Despite his growing zeal for Islam he never dressed any differently, leading Fardos to hope it was just a passing phase.

“When I heard he had joined a gym I was happy,’ added his mom, a special aid assistant teacher and high school Arabic translator.

“I had been encouraging him to get a job, go back to school. He did actually start a job a few months ago at Marshalls.

“He even shared with me that he was going back to school in September to study cyber security which I was super excited about.”

Hadi Matar was understood to be using a fake driver’s license under the name Hassan Mughniyah when he committed the botched assassination.

According to the woman, her extroverted son became a moody introvert, unhappy and withdrawn after returning from that trip.

Fardos also revealed that she had expected her son to come back from the trip ‘motivated,’ but instead, the young man, who was once outgoing and popular, would lock himself in the basement, refusing to speak to his family for months.

“The first hour he gets there he called me, he wanted to come back. He stayed for approximately 28 days, but the trip did not go well with his father, he felt very alone.”

“I was expecting him to return motivated, complete school, get his degree, and get a job.

But instead, he locked himself in the basement. He had changed a lot, he didn’t say anything to me or his sisters for months,” she said.

According to the distressed mother, she learnt about her son’s frenzied stabbing of acclaimed author Rushdie when FBI agents raided her Fairview, New Jersey home on Friday afternoon.

Fardos said FBI agents seized a number of items from her son’s basement apartment – including a computer, PlayStation, books, knives and a tool to sharpen blades.

“I received a call from my daughter. I was at work and she told me the FBI are here – I was shell shocked,” said Fardos Silvana.

Rushdie’s life has been under threat since 1989 when the late Ayatollah Khomeini – leader of Iran’s Islamic revolution – condemned his famous book, The Satanic Verses, as blasphemous and issued a fatwa calling for his death.

Silvana, who is Lebanese and born Muslim, said she didn’t know if her son had ever read Rushdie’s book, but detected he had become more religious since his trip, adding that he would criticize her for not giving him a strict Muslim upbringing.

Matar was born in the US to Lebanese parents who emigrated from the southern border town of Yaroun, a stronghold of the Iranian-backed terror group Hezbollah.

He grew up and went to school in Cudahy, California, before his mom divorced his father Hassan Matar in 2004, her ex-husband returning to the Middle East while she moved to New Jersey for a fresh start.

It was on a trip to Lebanon in 2018 to visit his father that Hadi changed from a popular, loving son to a moody introvert, according to Silvana.

“I just cannot believe he was capable of doing something like this. He was very quiet, everyone loved him. As I said to the FBI I’m not going to bother talking to him again. He’s responsible for his actions.

“I have another two minors that I need to take care of. They are upset, they’re shocked. All we can do is try to move on from this, without him.”

The distraught woman said her son slept throughout the day and remained up at night.

“He sleeps during the day and wakes and eats during the night. He lives in the basement. He cooks his own food.

“I couldn’t tell you much about his life after that because he has isolated me since 2018. If I approach him sometimes he says hi, sometimes he just ignores me and walks away.

“I’m Lebanese but I’ve been here for 26 years. I’m living a simple life as a single mom, trying to keep a roof over our heads and food on the table for my kids.

“I don’t care about politics, I’m not religious. I was born a Muslim and that’s it basically. I didn’t push my kids into religion or force anything on my son. I don’t know anyone in Iran, all my family are here.”

“I felt like he was in a long-term depression and now it was time for him to recover and come back to life, to come back to his family.’

Fighting tears she added, “I have not watched the video of what happened, I don’t want to. All I know is what was written.

“The FBI gave me a document to sign saying they had taken his computer, his PlayStation, some books, some other items including knives and a sharpener.

“I feel sorry for Mr. Rushdie. I hope he recovers but there’s nothing much I can say or do because this wasn’t my act. Fardos said.