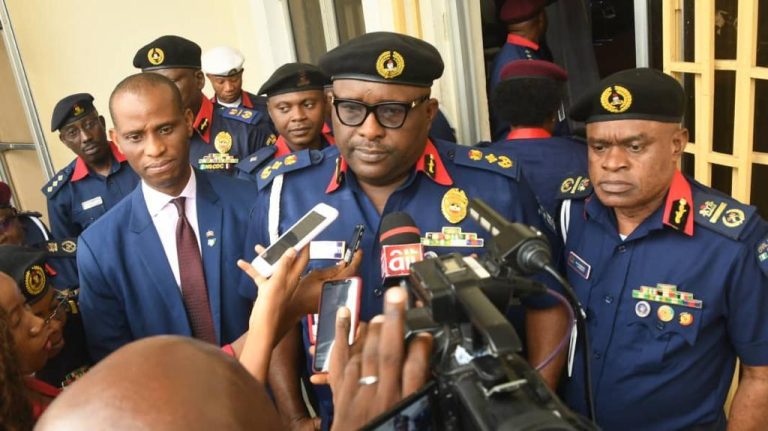 LAGOS, Nigeria (VOICE OF NAIJA)- As part of an effort to promote civilian security and harm mitigation, the Nigerian Security and Civil Defense Corps, NSCDC, has revealed its plan to heighten security measures by building the capacity of Corp members.

This was disclosed by the Deputy Commandant-General and Head, Directorate of Critical Infrastructure and National Assets, NSCDC, Mr Nnamdi Nwinyi, who Commandant-General of the Corp, Mr Ahmed Abubakar-Audi, at the one-day training session in Abuja on the ‘Protection of Civilians and Civilian Harm Mitigation’, organised by the Centre of Civilians in Conflict (CIVIC Nigeria).

He said:  “The Nigerian Security and Civil Defense Corps have always been committed to ensuring the safety of Civilians however, with the new security trends, we must increase our level of interaction with the Nigerian civil populace, especially interns of education and training.

“We are committed to continuous training and the commandant general assured us that measures such as this would continue to take place.” He mentioned

Speaking, the Country Director, CIVIC Nigeria, Mr. Benson Olugbuo, stressed that the citizens should be involved in every decision that affects their security

He said: “There is a need for training and retraining of security agencies to ensure there is the reduction of civilian casualties during crises, especially during internal security operations. Agencies such as civilian protection committees need to be created where both the security agencies and the civilians in a crises area collaborate on the best security approach and measures to be taken”

“We believe that civilian harm is not unavoidable even when eternal security has been planned, there is a need to check the collateral damage on the civilians. One of the principles of security is that security should be planned in such a way that civilians harm is avoided and reduced“, he added

According to him, in cases where civilians are harmed the security agencies must ensure accountability, compensation and acknowledgement of such situations.