Broadcaster Rufai Oseni Apologizes Over Use Of BRT Lane 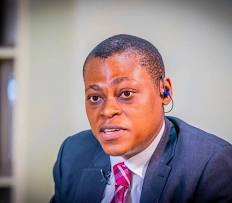 This comes after the popular TV broadcaster, Rufai Oseni, was fined the sum of ₦70,000 for committing a traffic infraction in Lagos.

The Lagos State Police Command Public Relations Officer, Benjamin Hundeyin, made this known in an update released on Tuesday, 2 August.

The Arise TV presenter had earlier trended on social media after he claimed that a policeman pointed a gun at him for driving on a dedicated Bus Rapid Transit lane.

Rufai tweeted on Monday that a Nigerian police officer pointed a gun at him, forcefully took his keys and drove his car off, “because he wanted to enforce a traffic infraction”.

Responding to the tweet, Hundeyin had said, “Rufai, let’s not do this. You admitted to me that you passed a BRT lane. It’s against the law.

Your claim that google maps took you there is not tenable. You disobeyed and resisted the officers. We’ll sanction the officer who misused firearm if proven.”

Gboyega Akosile, Chief Press Secretary to Lagos State Governor, Babajide Sanwo-Olu had in a statement via his Twitter handle, described the broadcast journalist as a lawbreaker, saying he (Rufai) had already admitted his offence to the police.

While some blamed the broadcaster for breaking the law, others were of the opinions that the move to prosecute him was political.

However, in a video that trended on Twitter on Tuesday, Oseni was directing insults at the policemen. He went to his car, then returned to the policemen in their vehicle and said, “I will call the governor…nonsense.”

While apologising for using expletives on the police later on Tuesday, Oseni maintained he had every right to call the state governor if he felt maltreated.

However, speaking during a morning show on Wednesday, Rufai apologized to friends, family and colleagues over the incident, saying he does not know it all.

He said, “As many of you know, I have been in the news for a few days for the wrong reasons. This has resulted in needless distraction for my friends, family, members of the public and for all my colleagues here on Arise News Channel.

“I would, therefore, like to apologize to all parties over what transpired during the incident with the police when I was stopped for driving on a bus lane.

“I cannot and dare not lay claims to know it all.”